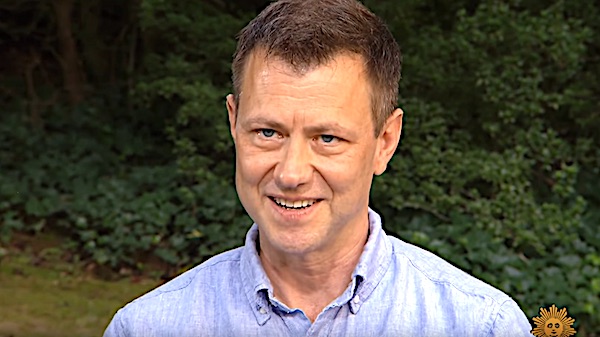 “I don’t think at all that it’s anything improper. You get people who are overworked, who make mistakes — and don’t get me wrong, inexcusable mistakes,” Strzok said in an interview with “CBS Sunday Morning.”

Strzok, the former FBI deputy chief of counterintelligence, was asked about a Justice Department inspector general’s report that blasted the FBI for a series of errors and omissions in applications for Foreign Intelligence Surveillance Act (FISA) warrants against Carter Page.

The IG found 17 “significant” errors in the FISA applications, including omissions of exculpatory evidence and failure to investigating information in the infamous Steele dossier.

Strzok oversaw the Trump-Russia investigation, dubbed Crossfire Hurricane, and drafted the paperwork that authorized opening the probe on July 31, 2016.

He also lobbied aggressively to obtain the initial FISA warrant against Page, which was granted on Oct. 21, 2016.

Should Peter Strzok be prosecuted for his role in the illegal attempt to oust President Trump?
99% (392 Votes)
1% (3 Votes)

“At a minimum, that keeps the hurry the F up pressure on him,” Strzok wrote in the email.

The IG faulted the FBI for relying heavily on the unverified Steele dossier in the FISA application.

Former FBI lawyer Kevin Clinesmith has pleaded guilty in an investigation led by U.S. Attorney John Durham to altering an email about Carter Page during the Trump-Russia probe. Clinesmith admitted that he added the phrase “not a ‘source'” to an email from a CIA analyst regarding Page’s longstanding relationship with the spy agent.

Steven Somma, an FBI counterintelligence agent, is also heavily criticized in the IG report as being “primarily responsible” for errors in several areas of Crossfire Hurricane, the name of the FBI’s investigation of the Trump team.

Strzok, who was fired from the FBI in August 2018, had repeated contacts with both Clinesmith and Somma.

Strzok was also aware of negative information about Steele, but failed to communicate it to the CIA or to the FISA Court, according to the IG report.

Strzok and his boss, Bill Priestap, met in December 2016 with British government officials to assess Steele’s reliability, according to the IG report. The report says that Strzok and Priestap were told that while Steele was an honest broker, he often displayed questionable judgement.

The IG report notes that the information about Steele’s reliability was not included in the FBI’s renewal applications for FISA warrants on Carter Page.

Attorney General William Barr has dismissed the idea that the FBI’s errors in Crossfire Hurricane can be chalked up to absent-mindedness on the part of investigators.

“My own view is that the evidence shows that we are not dealing with just mistakes or sloppiness, there is something far more troubling here,” he said in a Fox News interview in April.

The Justice Department deemed two of the four FISAs against Carter Page to be invalid because of the FBI’s errors.