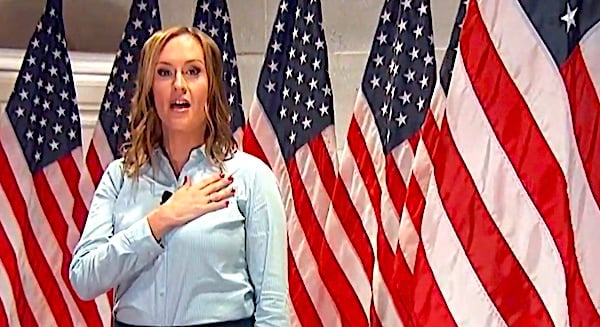 The U.S. Supreme Court will hear a case in October on whether officials from the FBI and other government agencies can be held accountable for violating Americans' constitutional rights.

A lawyer for the Institute for Justice, which has filed a friend-of-the-court brief in the case, argued it's a "bedrock principle of American law that government officials are not above the law."

"In the 19th century, when federal agents violated plaintiffs' constitutional rights, they could bring a damages claim," said Anya Bidwell.

"To argue that damages are not 'appropriate relief' for the violation of individual rights ignores hundreds of years of American legal history."

IJ said the case "is a unique opportunity for the court to send a clear message to the FBI and other government agencies that they cannot trample on constitutional rights with impunity."

The case, Tanzin v. Tanvir, came about after the FBI approached  Muhammad Tanvir in 2007 and asked him to spy on members of his religious community.

IJ claimed that after he declined, the FBI  repeatedly questioned  him, harassed him, confiscated his passport and placed him on the No-Fly List.

Should government be held financially liable for violating your constitutional rights?
98% (256 Votes)
2% (5 Votes)

"Despite  the absence of evidence that he was a threat to air safety, the government kept Tanvir on the list for years.  His inability to fly during that time  cost him his job as a long-haul trucker and prevented him from visiting  his family,  including his wife, son, and parents, who live  abroad," IJ said.

Later, he met up with several others in similar situations and sued.

Then, just hours before a hearing was to be held in the case, the government told them they had been removed from the list. Government officials argue that since they were free to fly, there was no case.

"This is ironic," said IJ Attorney Keith Neely. "Historically, damages have been the go-to remedy for government’s violations of your rights. After all, it is much less intrusive for the courts to order a monetary redress than for the law to change or for the government activity to be halted altogether."

While the trial court judge agreed with the government and dismissed the case, the 2nd U.S. Circuit Court of Appeals reinstated it.

Several recent cases involving possible damages against government actors have not been taken up by the high court. Justice Clarence Thomas has questioned the value of qualified immunity, a doctrine that shields government officials from the consequences of their actions.

IJ's filing in the case is part of its Project on Immunity and Accountability, which seeks to make constitutional rights enforceable against the government officials who violate them.

The campaign also includes cases on behalf of an Idaho woman and a Colorado family whose homes were destroyed by the police, who took no responsibility.

"Since  the founding of this country, the role of  our  courts has been to decide whether a person’s rights were violated and, if so, award appropriate relief, which  historically  includes  money damages," explained IJ  Attorney  Patrick  Jaicomo. "If  the Supreme Court adopts the  government's position, government officials can violate the  Constitution  without consequence. They are effectively above the law."