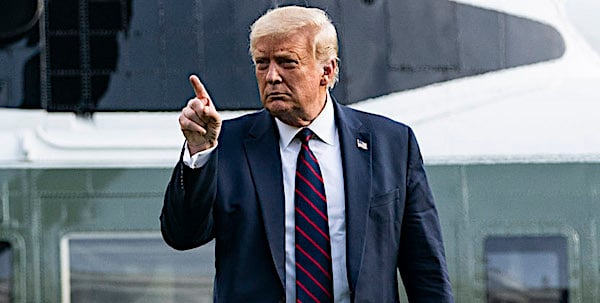 President Trump has warned of Democratic presidential candidate Joe Biden's relationship with communist China, telling a campaign rally: "If Biden wins, China wins. It's as simple as that."

And now a report from Just the News notes the "stunning turnabout" in this election year as Biden vows to "get tough with China."

Biden has been a "four-decade advocate of trade and friendly relations with Beijing," the report pointed out.

For U.S. security experts, the reversal was noteworthy for another reason.

The approval for the deal came from the Obama administration and its Committee on Foreign Investment in the United States only about a year after one of AVIC's subsidiaries was put on a Commerce Department blacklist.

"The timing has left many, including Senate Finance Committee chairman Chuck Grassley (R-Iowa), questioning whether the CFIUS decision whitewashed security concerns because the vice president's son was involved in the transaction. Those concerns were heightened this June when the Pentagon listed the entire AVIC conglomerate on a list of companies subject to future sanctions because of its ties to the People's Liberation Army," the report said.

Grassley ordered a briefing from Treasury Secretary Steven Mnuchin last year and "officials said what Grassley learned in a classified briefing only heightened his concerns," the report said.

"The direct involvement of Mr. Hunter Biden and Mr. Heinz in the acquisition of Henniges by the Chinese government creates a potential conflict of interest," Grassley said at the time. "Both are directly related to high-ranking Obama administration officials. The Department of State, then under Mr. Kerry's leadership, is also a CFIUS member and played a direct role in the decision to approve the Henniges transaction. The appearance of potential conflicts in this case is particularly troubling given Mr. Biden's and Mr. Heinz's history of investing in and collaborating with Chinese companies, including at least one posing significant national security concerns."

Investigative reporter Peter Schweizer exposed Hunter Biden's lucrative deal in China, pointing out he traveled on Air Force Two in 2013 with his father to Beijing to engage in private business discussion about a $1 billion investment fund.

Some of Hunter Biden's China deals have had complications, the report said. His BHR invested in 2014 in the China General Nuclear Power Corp., and two years later the company was accused of conspiring to help China illegally obtain sensitive nuclear tech from the U.S. One engineer, Szuhsiung "Allen" Ho, was sentenced to two years in prison.

A China adviser to both the Obama and Trump administrations, Michael Pillsbury, suggested the scenarios that have played out should be a call for journalists "to question the sincerity of Joe Biden's recent conversation to China hawk."

Just the News reported AVIC itself has been sanctioned at least five times for actions including violating the Arms Export Control Act, and it was involving in "stealing sensitive data regarding the Joint Strike Fighter program," Grassley revealed.

Just the News explained that while Hunter Biden was setting up business with China, the administration in which his father was vice president was working with China for its companies to participate in the U.S. stock market without having to comply with accounting rules.

Joe Biden was carrying the message that "it's overwhelmingly in our interest that China grows."