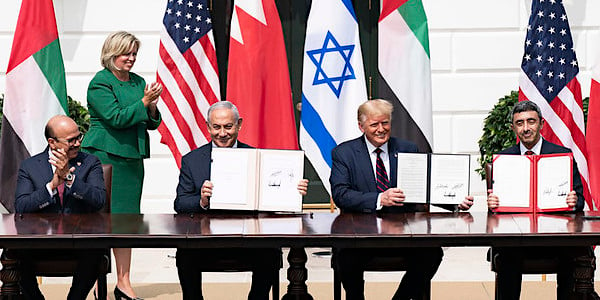 Declaring the "dawn of a new Middle East," President Trump presided over the signing of the "Abraham Accords," two historic Middle East diplomatic agreements between Israel and two Gulf nations on Tuesday.

"We're here this afternoon to change the course of history. After decades of division and conflict we mark the dawn of a new Middle East," he said at a ceremony in the South Lawn of the White House.

Trump said the deals normalizing relations between Israel, the United Arab Emirates and Bahrain form "the foundation for a comphrensive peace across the entire region."

"Thanks to the great courage of the leaders of these three countries, we take a major stride toward a future in which people of all faiths and backgrounds live together in peace and prosperity," Trump said.

The deals included the exchange of ambassadors, establishment of embassies and co-operation on trade, security and tourism. In addition, Muslims are allowed to visit Islamic holy sites in Israel.

Before the ceremony, Trump told reporters his administration is "very far down the road" with "five or six" other countries.

Israeli Prime Minister Benjamin Netanyahu was present to sign the deals with the foreign ministers of both the United Arab Emirates and Bahrain. The UAE agreement was announced last month and the Bahrain deal on Friday.

Netanyahu rejected the claim that Israel was isolated in the region, insisting "we're breaking out to the entire world."

Providing analysis after the ceremony on Fox News, Keane said one U.S. administration "after another" has tried to resolve the Israeli-Palestinian conflict, including the Trump administration.

"That pathway has never worked. The Arabs, quite frankly -- none of them will make a public statement about this -- but it is a fact, because I know them myself: They are tired of the Palestinian rejection, which no matter what deal is put in front of them, no matter how many concessions the Israelis make, they will not take the deal."

Hamas, a terrorist organization which runs the Gaza strip, has stated it will never recognize Israel, he noted.

"So that's what makes this shift a paradigm shift, because now we are moving to do peace relations on an individual basis," Keane said.

It began with the "most enlightened, most innovative leader in the Middle East," Mohammed bin Zayed al-Nahyan, ruler of the United Arab Emirates.

Keane said the catalyst to the agreement was President Trump's May 2017 visit to Saudi Arabia.

At the Arab Islamic American Summit, Trump told the 54 leaders he stood side by side with them against the No. 1 strategic threat in the region, Iran, and vowed to assist them against Islamic extremism.

Keane said the agreements put more pressure on Iran to come to the negotiating table.

The Obama administration, he said, was "trying to appease" Iran through the nuclear deal, which lifted hundreds of billions of dollars worth of sanctions against the Islamic regime.

With a fortified Iran, the violence in the region increased, Keane pointed out.

"Iran did not become a responsible nation in the international community as the Obama administration had desired," he said. "It became more malign and more aggressive."

The Trump administration, Keane recounted, withdrew from the Iran nuclear agreement, reached out to the Arab nations and said, "Let's work together."

The Obama administration, he noted, had the worst relationship with Israel of any U.S. administration since the founding of the Jewish state in 1948.

In January, Netanyahu described Trump as the best friend Israel has ever had in the White House.

"So these are the two catalysts that have driven us to this momentous occasion," Keane said. "It is quite remarkable."

He said the Abrahamic Accords put "enormous pressure on the Iranians."

If Trump had another year or so left in his term, Tehran would be at the negotiating table now, Keane said. But the mullah regime is waiting to see who will win the election in November.

"They are on their heels in a way I have never seen," he said.

The deals with the UAE and Bahrain are "only the beginning," with Iran, Sudan and other countries following suit, normalizing relations with Israel.

In a statment Tuesday she said the agreements marked "an important day" but "questions remain."

"As we learn more about the full details of both agreements, questions remain – specifically, regarding the commitment that the UAE has received from the Trump Administration to purchase American-made F-35 aircraft," she said. "The U.S. Congress, on a bipartisan basis, will be watching and monitoring to ensure that Israel can maintain its qualitative military edge in the region."

Pelosi said it's also "critically important that we fully understand the agreements' details regarding the announced freeze of efforts by Israel to annex portions of the West Bank."

Massive number of Americans blame one person for inflation