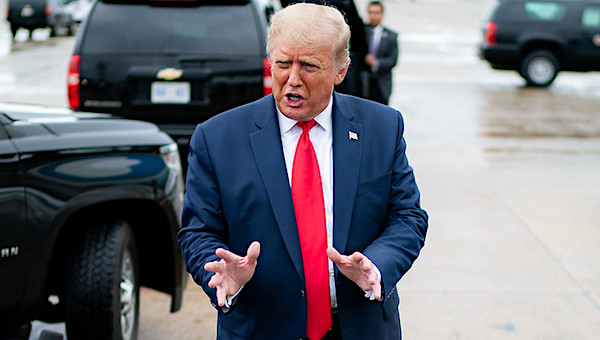 Trump made the comments during an interview with Fox News host Jeanine Pirro, who asked about Biden’s mental fitness during a conversation about the upcoming presidential debates. There is no public evidence of Biden using drugs.

“How do you think he goes from incoherent to coherent?” Pirro asked.

Trump responded: “I think there is probably, possibly drugs involved. That’s what I hear. I mean there’s possibly drugs. I don’t know how you can go from being so bad where you can’t even get out a sentence.”

“You saw some of those debates with the large number of people on the stage. He was — I used to say how is it possible that he can even go forward?” he continued.

Trump offered no evidence to support his comments.

Trump had been referring to Biden’s performance in the Democratic primary debates in 2019 and early 2020. Biden is sometimes coherent and sometimes incoherent, Trump said.

When asked about his preparation for the debates, Trump said he isn’t doing traditional preparation and studying. Rather, he said he wants to be “loose.”

The president’s comments aren’t the first time he has commented on Biden’s mental fitness.

“Great! Biden is finally being forced out of his basement. Now you’ll be able to see what is going on ‘up there,'” Trump tweeted on Sept. 8 referring to the Biden campaign scheduling of more public appearances.

Biden, who would be the oldest president in U.S. history if elected in November, said asking about a candidate’s cognitive abilities is a legitimate question in an August ABC News interview, The Hill reported. However, he repeatedly affirmed his own mental fitness for the presidency.

“The only thing I can say to the American people … watch me,” Biden said, according to The Hill.

The first presidential debate will take place on Sept. 29.