With the death of Ruth Bader Ginsburg, I didn't think it was possible for politics to get any crazier, but it has.

The left, predictably, is having a collective meltdown over the passing of RBG – not because she's dead, but because she was inconsiderate enough to die when it might sabotage the progressive agenda. To see what I mean, take a gander at the video below (warning: obscene language):

Now remember, it's not as though someone else caught this woman during a bad moment. She's alone in her car and deliberately recorded herself having this ridiculous temper tantrum, then put the video online. Honestly, I don't know whether to be horrified or amused. She's insane with hatred. This is the "deranged" part of Trump Derangement Syndrome. How does this cupcake function? How does her frothing-at-the-mouth hatred affect her health, her relationships, her career?

Would you want this woman teaching your children? Providing your health care? Preparing or serving your food? In many ways, I pity her. This goes beyond – way beyond – mere hatred for Trump. This tips into mental illness.

My criteria dividing those who are liberal with those who are deranged is the "dinner test." A dear family member, for example, is a confirmed liberal. But while we disagree on issues, we can sit down for dinner, have a perfectly cordial discussion about various political topics, and rise up again still friends.

Now apply the "dinner test" to the woman in the video above. What would happen if we sat down and attempted to have a cordial conversation about politics? I have a vision of smashed dishes, upended furniture and another screaming temper tantrum.

Or how about the suburban soccer mom for whom the death of RBG spurred her to join the Satanic Temple, since the Satanists are most likely to support abortion rights? (Well, yeah. Duh.) Or how about this weeping harpy who wishes she had been aborted because she's so upset that Trump gets another Supreme Court pick?

Clearly these unstable lunatics are just some of thousands of crazy Trump Derangement Syndrome sufferers across the country, many of whom have expressed their political displeasure through anarchy. In the belief that violence is a convincing voter-persuasion strategy, the Democratic Party has hitched its wagons to these domestic terrorists.

Trump supporters are in the cross-hairs of the Democrat foot soldiers. There are so many examples of this, I can't possibly begin to list them. Anyone who isn't screaming in fury or lifting a fist in solidarity is hunted down, called Nazis, even murdered. Is this the way to attract or keep supporters?

The sheer irrationality of the left is turning millions of voters away from the Democrats. "Over and over again, Trump has made it clear that he's about improving life for ordinary Americans and protecting the country for all of us," writes Bruce Bawer in FrontPageMag. "Meanwhile, the Democrats have shown that they're willing to kowtow to radicals, however violent, in order to win power and to take almost any position, however absurd, as long as it's the opposite of Trump's."

Haunted by memories of 2016, progressives everywhere are losing their minds at the thought of Trump appointing another Supreme Court justice, let alone winning the election. But consider, no sane (emphasis on sane) person wants to be associated with lunatics like the ones featured above.

What the left can't – or won't – admit is their actions over the last four years have driven millions of voters in the opposite direction – including many Black, Latino, Asian and gay voters who might otherwise have voted Democrat. Shocking development: Sane people of every ethnicity and sexual orientation decry violence and anarchy.

The decades of Marxist indoctrination taking place in public schools and universities is now bearing fruit (I can almost guarantee the women featured above weren't homeschooled) as young people emerge from their educational years so utterly ignorant that they believe a system that has raised more people out of poverty over the last 250 years is inferior to a system that has killed at least 100 million people in the 20th century alone. Toss in the constant negative coverage by the mainstream media and voilà: apoplectic fits or born-again Satanists.

It's important for Trump supporters to realize that most Democrats are impervious to logic or reason. No matter how many times they're warned that violence, chaos, intimidation, arson, murder, and screaming tantrums don't work – they won't listen.

Instead, they’re cocooned in an echo chamber, only listening to people who agree with them. "Surrounded only by others like them, they assume the rest of America, or at least by the rest of the voters who might consider voting Democrat, mirror their ideas," observes Kyle Sammin in the Federalist.

But the Democrats are driving people away in droves. Every time the left lurches further left, they leave behind the moderates who hate what their party has become. Every time some screeching banshee loses it on TikTok, the moderates are shaking their heads and siding with the man who favors law and order and capitalism, not anarchy and murder and Marxism. Every time domestic terrorists start fires and scream "Death to America!" the moderates move right. 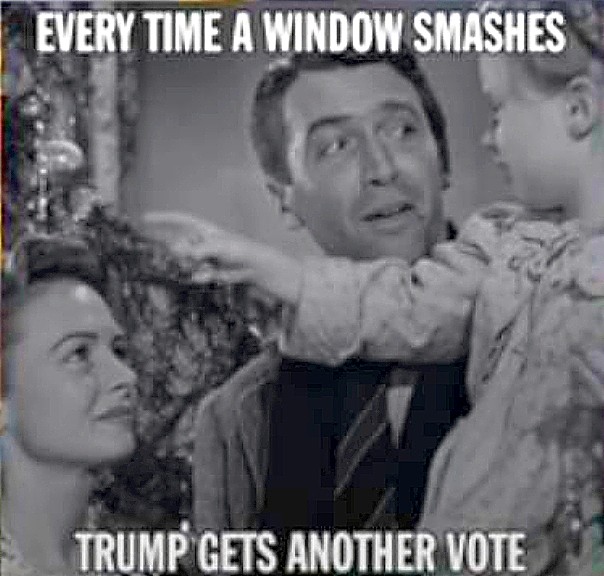 Trump supporters are not necessarily Republicans. Trump supporters are essentially third-party voters who support the Constitution. So many people are turning to Trump because they have no choice but to vote against the party of insanity the left has become. The difference between the two sides is this: Conservatives think it would be nice if progressives changed their minds. Progressives want conservatives dead.

It's been said the far left is nothing more than a right-wing recruiting machine. What the heck, maybe we should be applauding the screeching banshees in the above videos. They're helping our cause.

Make no mistake, Trump Derangement Syndrome will help reelect Trump in 2020. When the two strategies – a sound America-first administration versus frothing-at-the-mouth violence and hysteria – the choice is clear for most SANE Americans.

Then again, we have a lot of insane Americans like the cupcakes in the videos. And that's the problem.