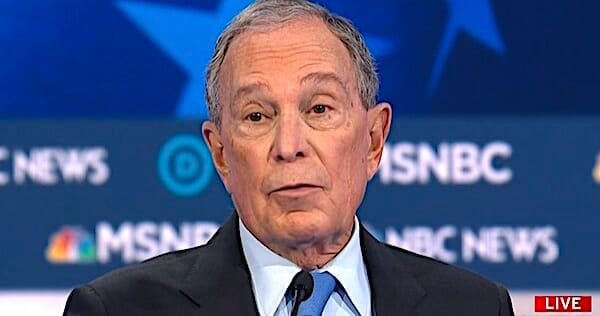 Former New York City Mayor Michael Bloomberg on Tuesday was sued in court in Florida for allegedly diluting the value of citizens' votes by coordinating a campaign to raise money, pay off felons' court fees, fines and costs, and give them back their vote.

The scheme already has raised questions about vote-buying.

The new case was filed by Larry Klayman, the founder of Judicial Watch and Freedom Watch, who explained the case accuses Bloomberg and others of a scheme "to bribe convicted felons to vote for Joe Biden and Kamala Harris."

"The dilution of my vote and the vote of Florida citizens by illegal means must not be permitted," Klayman said. "Michael Bloomberg and his co-conspirators must not be allowed to influence an election for any presidential or vice-presidential candidate. I am therefore asking the circuit court in Tallahassee to issue a declaratory judgment and preliminary injunction barring this illicit plan from going forward.

"The multi-billionaire Bloomberg is not above the law and he and his co-defendants must be reined in and held to account."

The lawsuit was filed by Klayman against Bloomberg, the Florida Rights Restoration Coalition, the Biden for President organization, the Biden Victory Fund, the state Department of State and the chief of its elections canvassing commission.

The case is over a development in the 2020 presidential election orchestrated by Bloomberg.

WND previously reported a congressman is asking Florida Attorney General Ashley Moody to investigate Bloomberg for vote-buying after the billionaire confirmed raising millions of dollars to pay the fines and fees of thousands of convicts in Florida so they would be able to vote.

Rep. Matt Gaetz, R-Fla., said he thinks there might be an investigation already underway.

I just spoke to @AGAshleyMoody, she is all over the @MikeBloomberg-connected activities in Florida.

There may even be a criminal investigation already underway.

Law enforcement all over the country should be looking for the cheating Democrats are going to try in this election. pic.twitter.com/S5K5gl8lYt

Gaetz wrote on Twitter: "Law enforcement all over the country should be looking for the cheating Democrats are going to try in this election."

Moody already "is all over the @MikeBLoomberg-connected activities," he said. "There may even be a criminal investigation already underway."

The issue is that Bloomberg confirmed raising millions of dollars to pay off fines and fees for some 32,000 convicts in Florida. They are not allowed to vote again until all fines and fees are paid, under a recent ruling from the U.S. Supreme Court.

Both state and federal laws forbid giving "something of value" for their vote.

Klayman's complaint charges the "Bloomberg defendants, acting in concert, are in the act of implementing pay-outs to pay restitution obligations, criminal fines, and fees of felons not eligible to vote."

"The project is designed and spearheaded by Michael R. Bloomberg, as detailed in a memorandum ('Bloomberg Memorandum') whose contents have been widely reported by the Washington Post."

The project "is intended to register to vote Florida citizens in order to illegally manipulate the election for president within Florida in and during the 2020 general election," the complaint states.

It notes that Bloomberg already had announced plans to spend $100 million to elect Joe Biden.

"Because Bloomberg has announced his spending of $100 million to defeat Donald Trump for re-election, the recipients of his largesse who are felons with voting rights restored will fully understand who the Bloomberg defendants are inducing them to vote for on November 3, 2020, by paying their criminal fines to make them eligible to vote," it says.

The filing points out that under Florida law alone, "any person who gives anything of value that is redeemable in cash to any person in consideration for his or her becoming a registered voter commits a felony of the third degree."

The case, in the 2nd Judicial Circuit in Leon County, Florida, requests an immediate hearing and seeks a declaratory judgment against allowing the pay-for-vote scheme.

Moore is suing comedian Sasha Baron Cohen for defamation for portraying him as a pedophile on a television program. A judge recently refused Cohen's demand to dismiss the case and ordered full discovery, which will include under-oath depositions of Cohen and other defendants.

In the Bundy case, the 9th U.S. Circuit Court of Appeals dismissed felony conspiracy and weapons charges over a standoff with federal government agents.

Klayman, a former Department of Justice lawyer, has filed suit on behalf of victims of Hugo Chavez, the Taliban and al-Qaida. He won a multimillion-dollar judgment against Cuba.