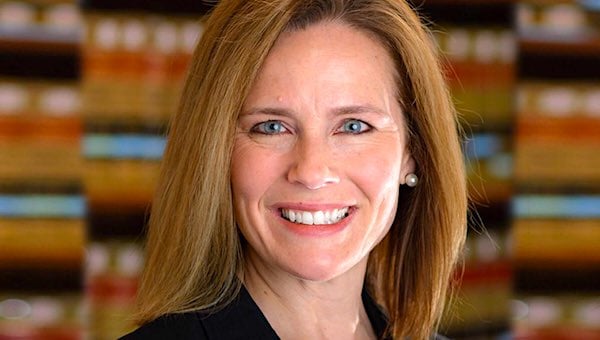 A sizeable majority of voters in battleground states believe the Senate should vote on President Trump's nomination of Amy Coney Barrett to the U.S. Supreme Court, according to new polls.

Three separate polls in six states show voters dismiss Democratic claims that the process is "illegitimate" and the nomination should be delayed until after Inauguration Day, wrote Paul Bedard, in his "Washington Secrets" column in the Washington Examiner

Trump's decision to replace Ruth Bader Ginsburg with Barrett has boosted the Supreme Court to a top issue in the election, he noted.

In the crucial battleground state of Pennsylvania, a poll for the pro-Trump organization America First Policies found 66% confirmed the court issue would be important in deciding their vote.

"Republicans, independents, and Catholics alike told us the Supreme Court issue was an important issue in their vote for the president," said Brian Walsh, president of the organization. "Republican senators should feel emboldened to move quickly and confirm a qualified, conservative justice who will uphold the rule of law."

"The American people want to move forward with the confirmation of Judge Amy Coney Barrett. This important polling data will arm senators with the facts they need to confidently vote yes for the president's nominee without delay," said Jessica Anderson, executive director of Heritage Action.

It showed that 81% of Republican voters want a vote on Barrett before the election, and 41% of "swing voters" want a preelection vote.

Bedard reported the poll for the Judicial Crisis Network found voters in North Carolina and Colorado dismissive of Democratic calls to suspend the court nomination until after Inauguration Day.