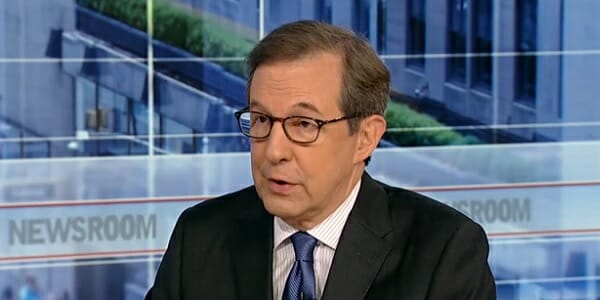 When the “Fox News Sunday” host takes the stage on Tuesday to moderate the first presidential debate of 2020, he will for 90 minutes be the most important person in the world.

His questions, his demeanor, his raised eyebrow will signal to millions of voters how they are to assess the two candidates — President Donald John Trump and former Vice President Joseph Robinette Biden Jr.

If his questions are piercing for both, if his skepticism is applied equally to both the Republican and Democrat, then all is well in this corner of the world of journalism. But if instead Wallace accuses Trump and coddles Biden, we will have one more instance of media bias, which has become so rampant that President Trump had to christen it with a pet name — Fake News.

Every day, the supposedly professional press corps cozies up to Biden with softball questions (“Why aren’t you more angry at President Trump?” has to be my favorite!) while accusing Trump of being a mass murderer, a racist and a Putin puppet. So conservatives are entirely justified in having low expectations for the debate and for Wallace, who has exhibited symptoms of Trump Derangement Syndrome more than once.

Wallace can ask anything he wants of Trump. I am confident the president will acquit himself admirably, but the litmus test for Wallace playing fair in the debate will be whether or not he asks any hard-hitting questions of Biden — especially about the new Senate report on the corrupt activities of his son Hunter in Ukraine and elsewhere.

If you have heard anything about the Biden report on CNN and MSNBC, or read about it in your newspapers, chances are you came away thinking that Republicans had made up a series of fake charges against the Bidens. “Nothing to see here. Move along.”

The Washington Post, as usual, was at the front of the pack for Fake News coverage. The Post used its headline to focus entirely on Hunter’s position on the board of the corrupt Ukrainian energy company Burisma, and claimed that the report doesn’t show that the cozy arrangement “changed U.S. policy” — as if that were the only reason you would not want a vice president’s son enriching himself at the trough of foreign oligarchs.

The story then spent most of its 35 paragraphs excusing Hunter’s behavior either directly or through surrogates such as Democrat senators, and most nauseatingly by quoting Hunter Biden’s daughter, Naomi, who “offered a personal tribute to her father” in the form of a series of tweets, including the following:

“Though the whole world knows his name, no one knows who he is. Here’s a thread on my dad, Hunter Biden — free of charge to the taxpayers and free of the corrosive influence of power-at-all-costs politics. The truth of a man filled with love, integrity, and human struggles.” Oh my, that’s convincing evidence of innocence of wrongdoing. I imagine she also endorses her grandfather for president, for what it’s worth.

The three reporters who wrote the Post piece also spin the facts like whirling dervishes. They say that the report by Sens. Ron Johnson and Chuck Grassley “rehashes” known details of the matter. They quote Democrats to say without evidence that the report’s key findings are “rooted in a known Russian disinformation effort.”

The following passage in particular shows how one-sided the story is:

“Democrats argue that Johnson has ‘repeatedly impugned’ Biden, and they pointed to his recent comments hinting that the report would shed light on Biden’s ‘unfitness for office,’ as reported by the Milwaukee Journal Sentinel, to argue that the entire investigation was orchestrated as a smear campaign to benefit Trump.”

Using the “shoe on the other foot” test, can you ever imagine a similar statement being made in the Washington Post about the Trump impeachment investigation? Let’s see. How would that go?

“Republicans argue that Rep. Adam Schiff has ‘repeatedly impugned’ Trump, and they pointed to his recent comments hinting that the report would shed light on Trump’s ‘unfitness for office’ to argue that the entire investigation was orchestrated as a smear campaign to benefit Biden.”

Oh yeah, sure! The chance of reading that paragraph in the Washington Post news pages would have been absolutely zero.

Perhaps even more insidious was the decision by the editors to push the most significant news in the report to the bottom of the Post’s story. That is the lucrative relationship that Hunter Biden established in 2017 with a Chinese oil tycoon named Ye Jianming. Biden was apparently paid $1 million to represent Ye’s assistant while he was facing bribery charges in the United States.

Even more disturbing, “In August 2017, a subsidiary of Ye’s company wired $5 million into the bank account of a U.S. company called Hudson West III, which over the next 13 months sent $4.79 million marked as consulting fees to Hunter Biden’s firm, the report said. Over the same period, Hunter Biden’s firm wired some $1.4 million to a firm associated with his uncle and aunt, James and Sara Biden, according to the report.”

Then, in late 2017, “Hunter Biden and a financier associated with Ye also opened a line of credit for Hudson West III that authorized credit cards for Hunter Biden, James Biden and Sara Biden, according to the report, which says the Bidens used the credit cards to purchase more than $100,000 worth of items, including airline tickets and purchases at hotels and restaurants.”

The Post also glossed over payments received by Hunter Biden from Yelena Baturina, who the story acknowledges “is the widow of former Moscow mayor Yuri Luzhkov and is a member of Kazakhstan’s political elite.” What the story doesn’t say is that the payments received by Hunter Biden’s companies while Joe Biden was vice president totaled close to $4 million. Does anyone have even the slightest curiosity why Hunter’s companies received these payments from a Russian oligarch? As Donald Trump Jr. noted, if he had the same record of taking money from foreign nationals, he “would be in jail right now.”

In other words, the headline and the lede of the Washington Post story were entirely misleading. What readers should have been told is that there is a pattern of corruption and inexplicable enrichment in the Biden family that has continued for years and that Joe Biden has turned his back on it.

Seems worthy of the attention of the voters who will determine the nation’s leadership for the next four years. So the most important question at the debate Tuesday night is the following: Will Chris Wallace take the same cowardly path as the Washington Post, or will he demand an answer from candidate Biden as to why influence peddling, conflicts of interest and virtual money laundering are acceptable?

Based on Wallace’s track record, I’m not holding my breath that we will get either the question or the answer, but if we do, I will happily applaud him as the tough-as-nails journalist he is supposed to be.