The fact that 2020 has become a year of historic "shaking" was not a surprise to Jonathan Cahn, the Messianic Jewish rabbi and author of many New York Times bestsellers, including "The Harbinger" and a sequel published this month, "Harbinger II: The Return."

When he and his colleagues set the date for the massive gathering on the National Mall in Washington this Saturday – "The Return — National and Global Day of Prayer and Repentance" – they certainly had the crucial Nov. 3 election in mind, 40 days hence.

But he said in an interview with WND he has long had "a real strong sense that it was going to be all the more strategic."

In "The Harbinger," Cahn showed how the signs of judgment and warning in the last days of ancient Israel are strikingly similar to signs in America today, particularly surrounding the Sept. 11, 2001, attacks. 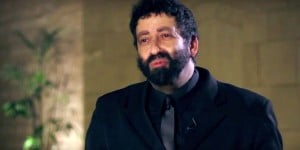 "The pattern and the template of the harbinger is that there is first a shaking, a warning, in the form of an attack – that was 9/11 – then there is a window of time for the nation to come back," he said.

"Then the window comes to an end and there are shakings."

Remarkably, the shakings that the prophet Jeremiah foretold for Israel – the window of time for repentance – came 19 years after the judgment.

"So for years I was wondering, would this be the year the shakings would come?" Cahn told WND. "And it has been certainly that."

Further, he pointed out, one of the shakings Jeremiah prophesies in the 19th year is a plague.

If the coronavirus, violent racial unrest, hurricanes and wildfires aren't enough, there likely will be more, he said in the interview, which took place just before the death of Supreme Court Justice Ruth Bader Ginsburg on Friday.

"I don't believe the shakings are over. I don't think we've seen the last of it. I believe there will be greater shakings," Cahn said.

When Cahn announced in a video message in March the plan for “The Return,” he said he believed America has been given the "window of time" for the purpose of "return and revival."

"Without that return, America will be lost," he said at the time. "In the days following 9/11, people flocked to houses of worship, and it looked as if there could have been a spiritual revival and awakening. But it never came because there was no repentance. And without repentance, without a turning back, there can be no revival."

But Cahn has seen in his lifetime "the hand of God change the course of American and world history."

The return begins, he emphasized, "not in the halls of government but with the people of God who gathered in a sacred assembly in our nation’s capital with Scripture: 'If My people who are called by My name will humble themselves and pray and seek My face and turn from their sinful ways, I will hear from heaven, I will forgive their sin, and I will heal their land.'"

“The Return” events this weekend will take place during the 10 days that are known from ancient times as the Days of Awe, beginning last Friday with the Jewish Feast of Trumpets and ending with the Day of Atonement on Sept. 28. “The Return” also corresponds with the 400th anniversary of the sailing of the Mayflower.

Many who can't make it to Washington for the assembly on the National Mall will gather across the nation in houses of worship and in homes to participate via a livestream.

Cahn will give a "prophetic word" at 11 a.m. Eastern on Saturday that he said will be "a call for America to return, a revealing of where America is, the biblical templets we're replaying and where it leads."

"We're at a very dangerous point," he told WND. "The voice of God calling to us."

Along with the livestream on the web, “The Return” will be broadcast on many television networks, including CBN, TBN, PTL, TCT, God TV and Daystar. And there will be simulcast partners around the world broadcasting in nearly 90 languages, according to the co-chairman of the event, Kevin Jessip.

“This will be the largest ever global gathering in the history of Christendom utilizing today’s technologies,” said Jessip, founder of the Global Strategic Alliance.

Cahn leads the Jerusalem Center/Beth Israel congregation just outside New York City, in Wayne, New Jersey. He has spoken at the United Nations, before leaders of Congress and at the Presidential Inaugural Prayer Breakfast in 2013 and 2017.

Yet another remarkable providence in the timing of the event Saturday, Cahn said, is the convergence with a dream recounted recently by Dana Coverstone, the Kentucky pastor whose video in June telling of dreams he said foretold of the coronavirus and racial unrest went viral.

Coverstone said he saw, in a more recent dream this summer, a calendar in which September was highlighted as a month in which there would be a growing movement of prayer for the nation and for revival amid increasing resistance.

The pastor saw a finger emphasize the last week of September, when there would be a "solemn assembly."

"That's exactly what the return is, a solemn assembly," Cahn said.

Cahn told WND that he had spoken recently with Coverstone, and the Kentucky pastor didn't know about The Return event when he had the dream. People told him about it later.

Cahn also later discovered that The Return "happens" to fall on a specially appointed day in the Hebrew calendar called Shabbat Shuvah.

He didn't know that when the event was scheduled.

Shuvah means "return," and the day is specifically appointed as the return of a nation to God.

Scriptures for that day include a passage from Joel 2, which says, "Sound the shofar, proclaim a solemn assembly and plead with him for the nation and the Lord will hear our prayer."

"All over the world on that Saturday, the scrolls will be opened in synagogues and there will be a reading from Joel about the solemn assembly," Cahn said.

That day on the Hebrew calendar is set apart as a time of prayer and getting right before the Lord, he noted.

Cahn pointed to another crucial time in America, during the Civil War, when Abraham Lincoln declared a solemn assembly "and it changed the course of history."

"We are at a more dangerous point than ever. We have an election that can change the course of the nation at such a time when so many signs are pointing to danger of judgment," he told WND.

"I believe that if we do not rise to this now, here, embodied by the return, we may pass the point of no return. That's why I'm calling on any believer who has any kind of burden for America to join, whether they come to Washington or wherever they are.

"But we need to do this as never before."