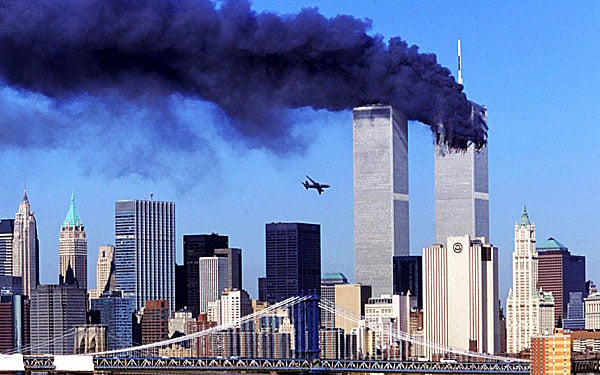 It's difficult to believe that the tragic events of 9/11 were 19 years ago. Most teens and even young adults today know about those loaded planes crashing into the Twin Towers, the Pentagon and on Pennsylvania soil only by historical media or their older relatives telling them.

To be honest, I'm concerned for the younger generations today that aren't learning much about either of those terms or learning about them packaged in progressive and politically correct history lessons that dumb down their real meanings or contexts.

First, let me state categorically: Though my wife, Gena, and I are Christians, we respect all other religions. Our republic was founded upon liberty, and the First Amendment protects all of our rights to believe according to our preferences and convictions. The volatility in today's culture proves how Americans need to return to a time when we can agree to disagree agreeably.

The problem today, however, is that too many Americans too easily polarize to one of two extremes, especially when it comes to 9/11 and Islam. We either lean toward Islamophobia (a fear of Islam) or we can polarize to the other extreme by sticking our heads in the sands of ignorance as if Jihadism no longer exists or is a threat to the U.S.

Our cry in the post-9/11 world was that we would "Never Forget." But have we? In our pursuit to get along with everyone, are we overlooking those who still want to destroy our country?

Do you think ISIS is obliterated? Do you think al-Qaida, which was primarily responsible for the carnage of 9/11, is no longer actively seeking to take down the West and America since Osama bin Laden was killed by our courageous U.S. military?

Let me give you a glimpse of some recent news that you likely haven't heard. And if you're wondering why you haven't heard it, it's probably because it's not the news narrative or ice-cream-flavor-of-the-day presently being played out by mainstream media.

Consider the titles of these recent terrorist news headlines in just the past month:

"British charity whose employee had connections to Al Qaeda is banned"

From these posts alone, it doesn't sound like Jihadists have gone into retirement, does it?

(Many feel that New York's government officials' recent refusal then reversal to shine the twin spotlights where the Twin Towers once stood on 9/11 is one small but significant proof of terrorist ignorance and avoidance. I was also glad to hear that the 9/11 Memorial Museum will reopen to the general public on Sept. 12. If you haven't made a trip to see it, there may not be a better time than now to show your patriotism for our country and your posterity the truths about America's history.)

A compromising mindset toward the goals of Jihadists reminds me of the backdrop of one of the 20-plus actions movies I filmed.

In 1999, I had starred in a CBS Movie of the Week called "The President's Man" that garnered high ratings for the network. I played Jonathan McCord, the president's secret agent who masquerades as a university professor between assignments. Two years later the network wanted another film with me playing the same character.

During the time I was trying to come up with a story idea for the movie, Gena and I had dinner in Dallas with our friends, one being a Texas U.S. senator.

I asked the senator what she thought was the greatest threat to America. "Terrorism," she replied straightforwardly. "Our greatest fear is someone like Osama bin Laden sneaking a nuclear weapon into our country."

She explained that we had allowed our nation to become vulnerable to such an attack. "During the last eight years under President Clinton's administration, our security measures and enforcement personnel have been drastically reduced," she said. "That concerns me."

It concerned me, too, and I thought that I might be able to shed some light on the problem.

After dinner I called my brother, Aaron, and told him to get our scriptwriters to my house first thing in the morning. "I think I have the story line for 'President's Man,'" I told him.

The story we developed involved a bin Laden-type terrorist who contacts the president of the United States and threatens to escalate terrorism all over the world unless his holy warriors, incarcerated for their involvement in the 1993 World Trade Center bombing, are released. Of course, the president refuses to give in to his demands.

In our story, a nuclear weapon is indeed sneaked into the United States. The president is threatened and told that the nuclear weapon will be detonated if the holy warriors are not released.

That's when I come into the picture, as the president's main man. I sneak into Afghanistan where the lead terrorist is hiding out. I kidnap him and bring him back to the United States for trial.

That would be coincidental enough were if not for the timing of the movie's release and the rest of the story!

Interestingly, my conversation with the senator took place nine months before Sept. 11, 2001. I had finished my last episode of "Walker, Texas Ranger" in April of that year, then plunged right into working on the sequel to "The President's Man" in May. As we made the film, we thought we were creating a fictitious story; we shuddered at the possibility of something catastrophic happening in our country.

As eerie and "coincidental" (or not) that the script's story and 9/11 were, that was only a television movie. What our nation experienced was real life. And the grief of those who still suffer from the loss of loved ones on 9/11 is still more real than life itself. May God continue to comfort them.

I hope, whoever our future president is, he is militarily passionate and never drops his guard on the global war on terror. It's imperative every president first be a strong commander in chief. Otherwise, my television movie might someday, tragically, have another prophetic consequence.

Like many of you, Gena and I pray every day that nothing like 9/11 will ever happen again. Only if we are prepared and stay alert and our country seeks God in genuine prayer will we prevail and possibly prevent another such tragedy.

With all the disruptions and divisions in our country, we need God more than ever before. What a perfect time for Franklin Graham, the son of the great Billy Graham, to call the country to pray with him on his Prayer March 2020 on Sept. 26 in Washington, D.C. I hope you can join him and thousands of others.

Every year on 9/11, I think about the comfort we personally and as a nation can receive from Almighty God as described in Psalm 91:1: "He who dwells in the shelter of the Most High will abide in the shadow of the Almighty."

We patriots will never forget.