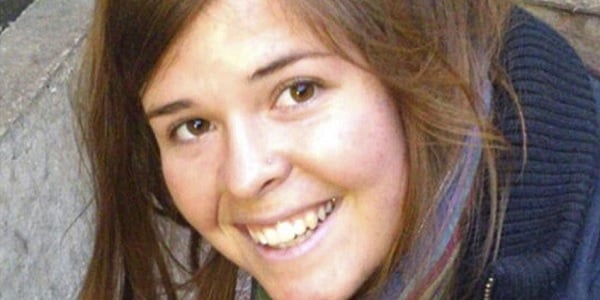 Two members of ISIS who are former British citizens have been charged for the deaths of Americans Kayla Jean Mueller, James Wright Foley, Steven Joel Sotloff and Peter Edward Kassig.

Alexanda Amon Kotey, 36, and El Shafee Elsheikh, 32, are scheduled to appear in court in Alexandria, Virginia, this week on charges they were ISIS fighters responsible for the deaths of Americans in 2012 and 2013.

Foley, Sotloff and Kassig were beheaded. Mueller was abducted and sexually abused for months before she was killed.

"These charges are the product of many years of hard work in pursuit of justice for our citizens slain by ISIS. Although we cannot bring them back, we can and will seek justice for them, their families, and for all Americans," said Attorney General William Barr.

"Our message to other terrorists around the world is this — if you harm Americans, you will face American arms on the battlefield or American law in our courtrooms. Either way, you will be pursued to the ends of the earth until justice is done," he said.

"Today, we remember the victims, Jim Foley, Steven Sotloff, Peter Kassig, and Kayla Mueller, and their families who are forever affected by these senseless acts of violence," he said. "These families have suffered with the painful loss of their loved ones at the hands of brutal killers; today's charges demonstrate the FBI's dedication and commitment to giving them the justice they deserve. We, along with our partners in the U.S. Government, remain steadfast in our duty to bring to justice those who have harmed our citizens -- no matter where they are, and no matter how long it takes."

The indictments against Kotey and Elsheikh allege they, along with the now-deceased Mohamed Emwazi and a British citizen jailed in Turkey, were ISIS fighters who took part in abducting and killing Americans and Europeans.

The defendants also are suspected of beheading British citizens David Haines and Alan Henning, as well as two Japanese citizens.

"Kotey and Elsheikh are alleged to have committed horrific crimes in support of ISIS, including hostage taking resulting in the deaths of four American citizens," said G. Zachary Terwilliger, U.S. Attorney for the Eastern District of Virginia. “Their alleged acts have shattered the lives of four American families. What each these families have sought more than anything else is for these defendants to have their day in court. Well, that day has come. While we cannot return their loved ones or undo the pain that these families face each day, we can do everything possible to ensure that the defendants are held accountable for their alleged savage actions."

The DOJ alleges: "Throughout the captivity of the American hostages and others, Kotey, Elsheikh, and Emwazi allegedly supervised detention facilities holding hostages and were responsible for transferring hostages between detention facilities, in addition to engaging in a prolonged pattern of physical and psychological violence against hostages. From November 2013 to February 2015, Kotey and Elsheikh allegedly coordinated the Western-hostage ransom negotiations conducted by email. Kotey and Elsheikh knew and understood that the release of American and other hostages was conditioned on the transfer of large sums of money or concessions from the United States government, such as the release of Muslim prisoners."

Kotey, Elsheikh and Emwazi allegedly forced prisoners to witness the execution of another prisoner, who was shot in the head and fell into a grave.

"Kotey instructed the hostages to kneel at the side of the grave and witness the execution while holding handmade signs pleading for their release."

Kotey and Elsheikh were captured together in January 2018 by the Syrian Democratic Forces as they attempted to escape Syria for Turkey. Emwazi was killed in a U.S. military airstrike conducted in November 2015 in Syria.