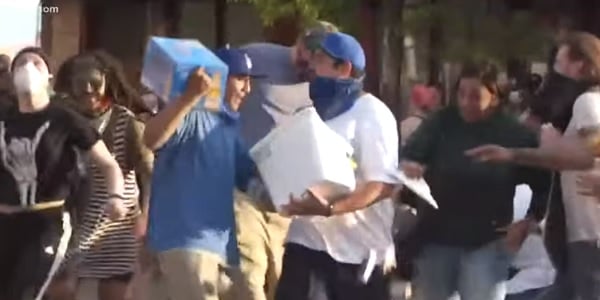 A photographer who expected to find white supremacists and people angered by racial injustice behind the looting that has plagued American cities since the death of George Floyd on Memorial Day instead found "insurrectionary anarchists" bent on revolution, according to a member of the New York Times editorial board.

The photographer, Jeremy Lee Quinn, had something of an epiphany after he witnessed the looting of a shoe store during a Black Lives Matter protest in Santa Monica, California, on May 31, wrote the Times' Farah Stockman. Quinn saw black-clad men wearing masks acting as supervisors of the looting. The next day he saw a black-clad white man break a store window with a crowbar but take nothing.

Eventually he discovered that groups he thought would be tied to white supremacy were "insurrectionary anarchists."

Quinn told Stockman he embedded himself with anarchists who ended up launching fireworks at Portland's federal court building and menacing diners in Washington, D.C.

He concluded the protests were not spontaneous outbursts of anger toward social injustice or police brutality. Instead they were strategically organized via social media by anarchists bent on tearing down the social structure and replacing it with an anarchist society.

According to the anarchist podcast "The Ex-Worker," the term "insurrectionary anarchist" dates back at least to the Spanish Civil War. Anarchists took "direct action" against the regime of Francisco Franco, which included assassinating policemen and robbing banks.

Stockman noted that on the third day of protests in Minneapolis after the death of George Floyd, the anarchist publication CrimethInc reported black-clad individuals broke windows, vandalized police cars and started fires before disappearing in the crowd of protesters.

Stockman reviewed an anarchist podcast that explained some anarchists take part in peaceful civil disobedience, while others commit arson and looting in an effort to wear down the capitalist system.

Pamela Paresky, the co-author of a Rutgers study, told Stockman that some anarchist's social media profiles have gained hundreds of thousands of followers since May.

She spoke of a "systematic, online mobilization of violence that was planned, coordinated (in real-time) and celebrated by explicitly violent anarcho-socialist networks that rode on the coattails of peaceful protest."

"The ability to continue to spread and to eventually bring more violence, including a violent insurgency, relies on the ability to hide in plain sight — to be confused with legitimate protests, and for media and the public to minimize the threat," Paresky said.