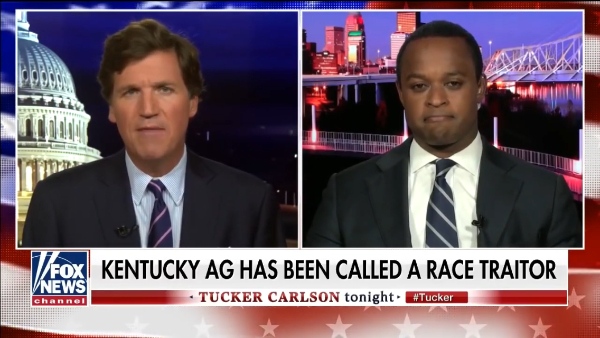 Kentucky Attorney General Daniel Cameron responded Thursday to charges that his handling of the Breonna Taylor case is a betrayal to fellow African Americans.

"It is so unfortunate that because I have a different political philosophy and because of my role as the attorney general and as the special prosecutor in the Breonna Taylor investigation, because I led with the facts and the truth and had that lead to the conclusion, somehow I betrayed my race," Cameron said in an interview with "Tucker Carlson Tonight."

Critics labeled him "a sellout" and a "hollow skull." Women's March co-founder Tamika Mallory was among many who said that while be may be "skinfolk," he's not "kinfolk"

"It is repugnant, it is so disappointing, but it's par for the course," Cameron said. "Anytime someone stands for the truth, and when that truth is different from a narrative that has been pushed by others, this is how they respond."

Cameron said he finally was addressing the attacks because "enough is enough."

Cameron was elected last year as Kentucky's first black attorney general ever and its first Republican AG in more than 70 years.

"Black Republicans, folks that believe in the truth ... we are going to stand up," he said. "That's what I did in presenting all of the information to the grand jury in the Breonna Taylor investigation, and that is what I'm charged to do. It is my responsibility to be attorney general of the Commonwealth of Kentucky."

No charges were filed against the officers who entered Taylor's apartment, Sgt. Jonathan Mattingly and Detective Myles Cosgrove, who fired back after Taylor's boyfriend, Kenneth Walker, opened fire.

Taylor's death is a "tragedy," Cameron told Carlson, but that "doesn't allow for me to not present facts and truth -- and that's what we've done here."

'Justified to protect themselves'

At the Sept. 23 news conference, Cameron said that according to Kentucky law, the use of force by Mattingly and Cosgrove "was justified to protect themselves."

Walker admits he fired first at police, who contend they knocked at the door of the apartment and announced themselves before breaking in. An independent witness confirmed that the police knocked and announced themselves. Walker claims he heard the knocking but didn't hear police announce themselves and thought it might be Taylor's former boyfriend. Taylor was not asleep when she was shot, as was widely claimed, but was standing in the hallway of the dark apartment with Walker while he was firing at the officers.

Mattingly and Cosgrove returned fire after Mattingly was struck by a bullet that, according to forensics, came from Walker's weapon.

It has also been claimed that the officers were at the wrong apartment and that Taylor was not suspected of any involvement in drug dealing. The officers, in fact, had a "no knock warrant" to search Taylor's apartment. And they had evidence of her participation in a drug ring with the former boyfriend, Jamarcus Glover.

The Louisville Courier Journal reported in August that an internal police department report, corroborated by jail phone recordings and other documents the paper obtained, show Glover was the main target in a drug probe that prompted police to request the search warrant for Taylor's apartment.

Police had evidence packages were being delivered to Taylor's apartment that Glover picked up. And a recorded jail call made by Glover on the same day that Taylor was shot names her as the person who was "handling" his money.

No money was found at her residence during the police search, the paper said.

Other evidence of Taylor's involvement included a call Glover made to her from jail on Jan. 3 in which he asked her to contact one of his co-defendants to get bail money.

Taylor said the associate was "already at the trap," a slang term for a house used for drug trafficking. Glover told her to be on standby to pick him up if he made bail.

"Love you," he said as he ended the call.

The Courier Journal reported there were several instances in which Taylor posted bond for Glover and another man involved in the case, Darreal Forest.

In the Jan. 3 call, Glover asked Taylor to contact a man named Adrian Walker — no relation to Kenneth Walker — to round up bail money.

After Taylor's death on March 13, according to the internal report, Glover spoke by phone with Adrian Walker, expressing his grief.