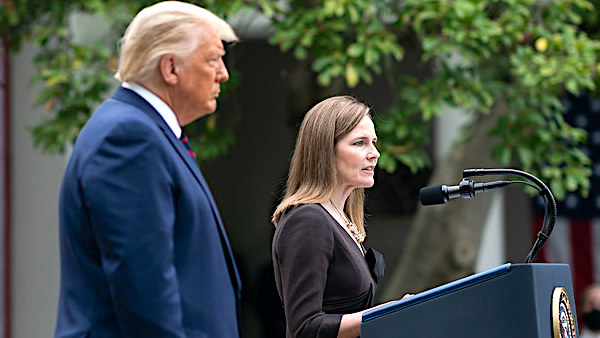 Judge Amy Coney Barrett delivers remarks after President Donald J. Trump announced her as his nominee for Associate Justice of the Supreme Court of the United States Saturday, Sept. 26, 2020, in the Rose Garden of the White House. (Official White House photo by Andrea Hanks)

With Democrats making the fate of Roe v. Wade an issue in the confirmation hearings for Amy Coney Barrett, the producer of a pro-life movie suggesting the landmark abortion decision can be overturned is speaking out.

Elizabeth Kennedy-Ryzewicz, the producer of "Divided Hearts of America," is the niece of former Justice Anthony Kennedy, who was the swing vote in upholding Roe in  the1992 Planned Parenthood v. Casey decision.

The movie recounts Kennedy retiring and being replaced by Justice Brett Kavanaugh in 2018.

"Nothing could prepare the nation for the ramifications of the 2016 presidential election," says the film's narrator, former New England Patriots tight end Benjamin Watson.

Newsweek reported the movie has been available for several months on the Salem Now streaming platform, but Kennedy-Ryzewicz did not promote it until she spoke to Newsweek.

She noted it was a surprise when "Uncle Tony" joined the liberal members of the Supreme Court, as he was nominated by President Ronald Reagan.

The possibility of Roe being overturned could increase if Amy Coney Barrett is confirmed to replace Justice Ruth Bader Ginsburg, who died Sept. 18.

In her effort to move more Americans to the pro-life side, Kennedy-Ryzewicz is lengthening the 80-minute movie, and negotiating for a theatrical release and more streaming platforms.

"We have so many beautiful interviews," Kennedy-Ryzewicz told Newsweek. "Dr. Ben Carson, for example, gave us one of the longest, most overtly pro-life interviews of his career, but we cut it down to a few moments."

See the "Divided Hearts of America":

Another interviews is of Melissa Ohden, who was born alive after an abortion procedure, Newsweek said.

"We're actually called 'the dreaded complication of abortion,'" she said, noting her grandmother argued for her to be left to die, but nurses saved her life.

The film "gives an unapologetically pro-life perspective that boldly tells the truth without any pretense of shame for pre-abortive or post-abortive women," she said.

"There are things in our movie that the mainstream media and pop culture don't want you to know."

She hopes her film will influence the November election.

"Every American, if they want to make an informed decision on November 3, either needs to do several months of devoted research on this topic or see our film," she said.