Text messages purportedly obtained from the laptop Hunter Biden abandoned at a Delaware repair show Joe Biden joining his brother to defend Hunter against claims of "sexually inappropriate" behavior with a minor, the Gateway Pundit reports.

In one text in March 2019, Hunter Biden complains that the mother of the minor is not allowing him to be alone with the girl. In another, he complains that Jill Biden is spreading the mother's claim he has been sexually exploiting the child.

Hunter urges the family member to persuade the mother -- whom he calls "stupid," "reckless" and "evil" -- "to see her own self interest in never saying that again as a reason I’m not allowed to be alone with [redacted]."

"There are many texts which I gave to them that point out that family was concerned about the safety of the child," Giuliani said. "I will tell you the evidence I gave them states it was reported to Joe Biden. What did he do about it?"

In another text message reported by Gateway Pundit from Hunter to a family friend, Hunter says Jill Biden is spreading the claim that Hunter is sexually inappropriate around the children and that Joe Biden also is aware of the charge. 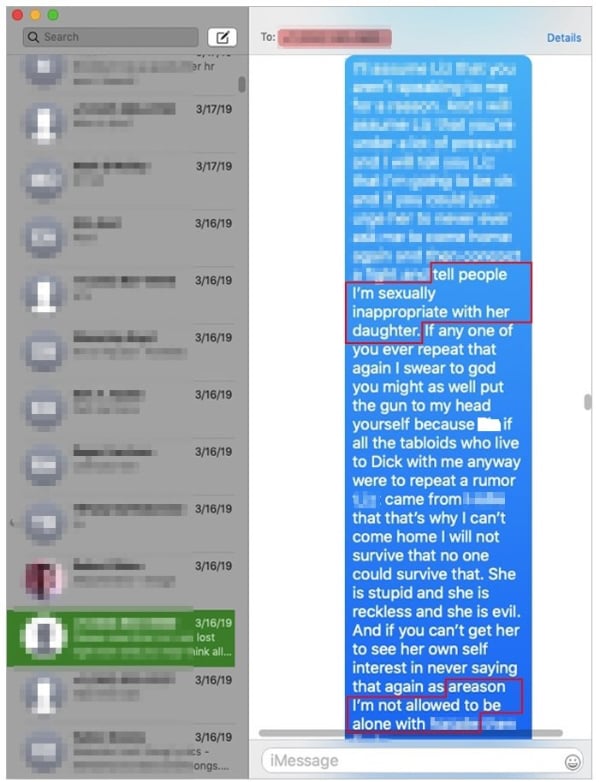 Hunter writes "my mom tells him things like I'm sexually inappropriate with the children."

"So tell me please how do I keep my kids without killing myself in the process," he asks. 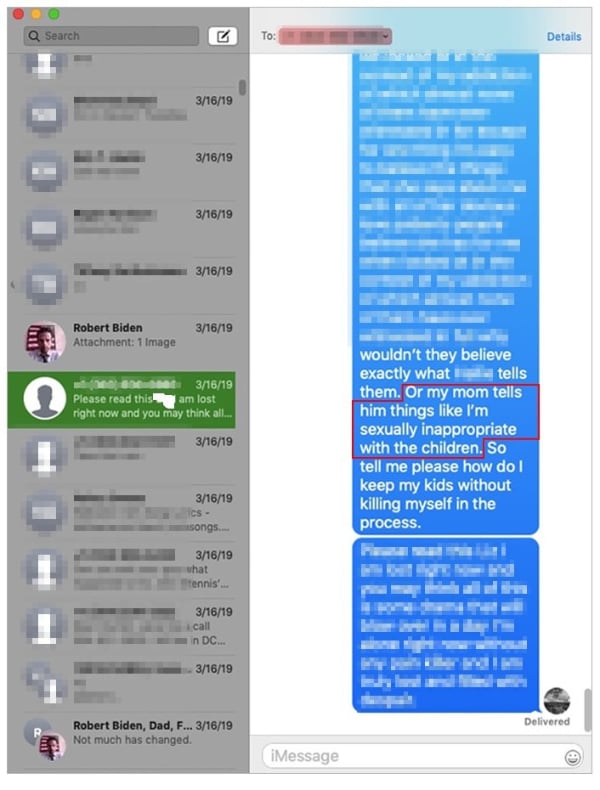 In a text message to Hunter Biden, his uncle Jim Biden says that both he and Joe Biden don't believe the claims but want to meet to hear his "side of the story."

Jim Biden writes: "Hunter, it is imperative you call me or your father. Your father is getting as I am barraged by someone. He has not responded I have not responded. We both agree with and trust you. She is spreading what you told me and I believe you!!!! Are lies. Once again we both need you side of the story so we can both shove it down her f****** throat!!!! I implore you to call. Please l/ we are on your side. I believe you, this is nothing short of character assassination. Love, U Jim."

In an email to former business partner Devon Archer, Hunter explains he is not allowed to be around the minor without Joe Biden being present.

"[Redacted] wont let me see [redacted] without my Father present. Can you f****** imagine that," he writes.

A fifth text message, from Hunter Biden indicates the mother of the minor told Joe Biden she would call the police if Hunter tried to see the child.

He writes that the mother "told pop that she would call the police if I tried to see you [redacted]."

.@gatewaypundit: MSM isn't just biased; they're openly lying to the American people, refusing to report the truth about #BidenCrimeFamily#BigTech has ratcheted up to a new level of censorship#WarRoomPandemic @WarRoom2020 #HardDriveFromHell #SteveBannon pic.twitter.com/LV76cSxmRM

.@ElizabethYore: Texts on #HardDriveFromHell are damning evidence, put @JoeBiden at the center of the scandal

'There is no controversy'

On Saturday, Joe Biden cut off a reporter asking about Hunter Biden's laptop, which the New York Post reported shows the former vice president was engages in influence peddling through his son that earned him and the family millions of dollars.

The reporter asked: "Questions [and] controversy continue today about Hunter Biden, your son's—"

Biden interjected: "There is no controversy about my son. It's all a lie. It’s a flat lie because the president has nothing else to run on. If you noticed, while the American people are talking about what’s happening to their families; he has no plan [and] at the debate, he has no plan.

"Everything from The Wall Street Journal, every other major news outlet has said what he’s saying is simply not true about my son, but it’s classic Trump, classic Trump," Biden said.

The provenance of the laptop has been verified, however, and two former Hunter Biden business partners who are copied in many of the messages confirm they are authentic.

Biden: "There is no controversy about my son. That's a hell of a lie. That's a flat lie because the president has nothing to run on... it's classic Trump." pic.twitter.com/MQQGvddrHO