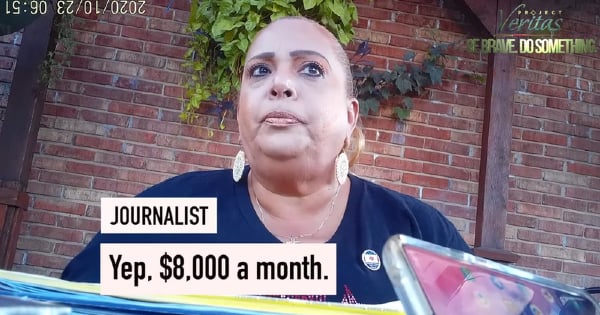 A political consultant in Texas boasts in a new Project Veritas hidden-camera report that she's been paid a total of $55,000 to flip 5,000 votes for Joe Biden and the Democratic candidate for the U.S. Senate in her state, MJ Hegar.

Raquel Rodriguez also was featured in a report Tuesday that caught her on a hidden camera coercing and bribing voters to vote Democrat, violating Texas and federal law.

She's a consultant for Republican House candidate Mauro Garza in Bexar County, Texas, but she admitted that "some of my Republicans are precinct chairs" secretly "want to help Biden."

She said she's paid to flip votes for Biden at a cost of "five to eight dollars per vote.

"Yeah, that’s what I’m doing. That's exactly what I’m getting paid to do," she said.

Rodriguez said she would not work for President Trump.

"Yeah, I'm getting the Biden vote out, but I mean I'm not going to do it for free -- in other words if they don’t pay me, I’m like excuse me?" she said.

"I'm against Trump. OK. I'm with Biden and I’m with Hegar. That's the truth," she said. "I've got three Democrats, three Republicans and the rest are Democrats."

Rodriguez said she was also hired to help judicial candidates.

After the report Tuesday, Garza issued a statement condemning Rodriquez's action and announcing she is no longer working for the campaign.

"What's shown in the video is shocking and should alarm all Texans who care about election integrity," Paxton said. "We are aggressively investigating the serious allegations and potential crimes that Project Veritas’s documentary audio and video recordings shed light on today."

“$55k for 5k votes, top of the ticket, Hegar/Biden”#RiggedElection pic.twitter.com/76qePEuOYR

In an exchange in a video published Tuesday, Rodriguez examines an elderly woman's ballot and convinces her to change her vote from Republican Sen. John Cornyn to Hegar.

After the voter "corrects" her ballot, Rodriguez presents her with a shawl as a gift.

"That's illegal. I could go to jail," Rodriguez acknowledges to the Project Veritas journalist. "If I go to prison, I do not look cute in stripes ... I will hate you forever."

"These so-called 'ballot chasers' use a mix of gifts and coercion to work down their list of targeted voters and make sure they vote for their paymasters," he said. "The actions violate both federal and state law and constitute a direct threat to the integrity of our election-based republic."

Rodriguez says to the undercover journalist she "can honestly say I'm bringing in at least 7,000 votes to the polls."

She said she drops off "bundles of ballots at different post offices to avoid suspicion."