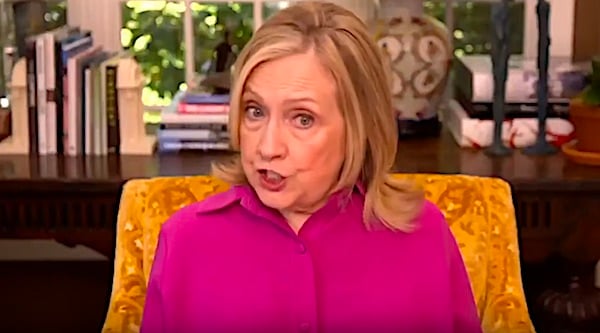 If Joe Biden is elected president and the Democrats retake the Senate, a wave of liberal programs drawn up by House Speaker Nancy Pelosi is set to launch, says the Democrat's 2016 presidential nominee, Hillary Clinton.

"Now, thankfully, Nancy Pelosi, bless her heart in every way we can, has teed up a lot of great legislation," Clinton told SiriusXM's "Signal Boost" show Thursday morning, the Washington Examiner reported.

She criticized the confirmation of Amy Coney Barrett to the Supreme Court and also said gun control is also a major priority.

"So let's see what happens. But, you know, I've told the Obama campaign, I mean, the Obama — I've told the Biden campaign and the Biden transition, that they're going to have to move really fast because let's assume we take back the Senate," said Clinton.

She said it "matters whether we take it back and we have 50 votes or 51 votes or more, and we're going to have to move really quickly."

Known as the Working Families Party's "People’s Charter," it calls for universal free health care, a jobs program employing 16 million people, retroactive hazard pay for essential employees and the reallocation of resources from policing toward education and other services.

It also promotes giving the public an ownership stake in firms that receive bailouts, along with buying out gas and oil companies, Politico reported.

Democratic socialist Sen. Bernie Sanders has laid out his own 100-day plan, vowing to back primary challenges against any Democrat who opposes it.

This ⬇️@krystalball: Bernie reveals plan for his own 100 day agenda to rival Biden’s.

Also says he’s prepared to back primary challenges against ANY Democrats who don’t move to a progressive agenda.
“You’re damn right I am.” https://t.co/XVN0B99xvX pic.twitter.com/IMpRZZuinK”

Squad member Rep. Ilhan Omar, D-Minn., declared in an interview Monday with "Axios on HBO" that she expects Biden, if elected, to adopt a progressive agenda despite casting himself as a moderate.

"A president is only as successful as his collaboration is with Congress. And we will have a cohort of progressives that are very clear about their objectives for wanting the implementation of Medicare-for-all and a Green New Deal and raising the minimum wage and not allowing for fracking," she said.

Omar said all of Biden's Cabinet posts should be filled with progressives.

She said "it will be a privilege to lobby him, should we win the White House."

“Vice President Biden has made very clear that he does not agree with a fracking ban… It will be a privilege to lobby him should we win the White House, but we need to focus on winning the White House first,” Rep. Alexandria Ocasio-Cortez says. https://t.co/9Fr3CsuXGF pic.twitter.com/0Uet4NPKsD