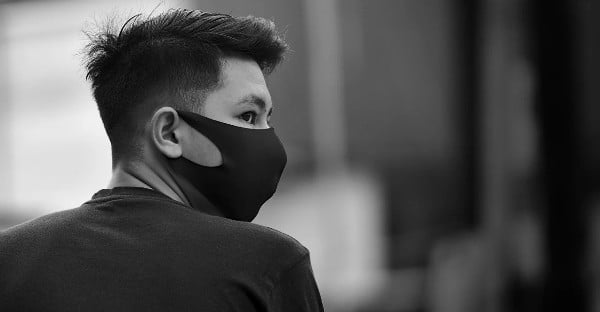 A dozen graphs charting the number of COVID-19 cases in countries and U.S. states confirm the conclusions of recent studies that mask mandates have no effect on the spread of the disease.

Yinon Weiss, a tech entrepreneur and U.S. military veteran who holds a degree in bioengineering from the University of California at Berkeley, pointed out in an analysis for The Federalist that after the initial panic over predictions that millions of Americans would die, the Centers for Disease Control currently estimates a COVID-19 survival rate of 99.99 percent for people younger than 50.

"It is likely that some politicians eventually realized their mistake and needed a way to back-pedal without admitting their lockdowns were a policy disaster," he wrote. "Their solution was for people to put any old piece of cloth across their face and magically believe that it’s okay to go out shopping again."

Weiss said the "mask dogma had many cracks in it from the start, noting the U.S. surgeon general and the Centers for Disease Control both said early in the pandemic that "masks are NOT effective in preventing [the] general public from catching coronavirus."

Leading scientific studies have come to the same conclusion. He cited a summary by the Centre for Evidence-Based Medicine at Oxford University of six international studies that "showed that masks alone have no significant effect in interrupting the spread of ILI or influenza in the general population, nor in healthcare workers."

Oxford said "that despite two decades of pandemic preparedness, there is considerable uncertainty as to the value of wearing masks." This has "left the field wide open for the play of opinions, radical views and political influence."

Also, a study of health-care workers in more than 1,600 hospitals showed that cloth masks only filtered out 3% of particles. An article in the New England Journal of Medicine stated "wearing a mask outside health care facilities offers little, if any, protection from infection" and that "the desire for widespread masking is a reflexive reaction to anxiety over the pandemic."

Other studies showing a lack of mask efficacy have been published, among others, by the National Center for Biotechnology Information, Cambridge University Press, Oxford Clinical Infectious Diseases and Influenza Journal.

In addition, a recent study published in the British Medical Journal found the sweeping lockdowns lead to more COVID-19 deaths and a prolonging of the pandemic than if the government were to let herd immunity build up in young populations, the National Post of Canada reported.

Weiss acknowledged that studies show masks can help in the case of someone breathing, coughing or sneezing respiratory droplets directly in a person's face.

But the evidence shows they have no significant impact on aerosol transmission.

Weiss then turned to the 12 graphs that show no impact on the number of cases after mask mandates were implemented.

Austria required masks about 10 days after its cases began to go down. Currently cases are four times higher than when Austria mandated masks.

A similar trend can be seen in Germany and France, which has a 1,000% higher rate of cases despite having one of the highest mask compliance levels in the world.

Cases in Spain were near zero when its mask mandate began and now are 1,500% higher.

After three months of requiring masks, the United Kingdom's cases also are more than 1,500% higher. 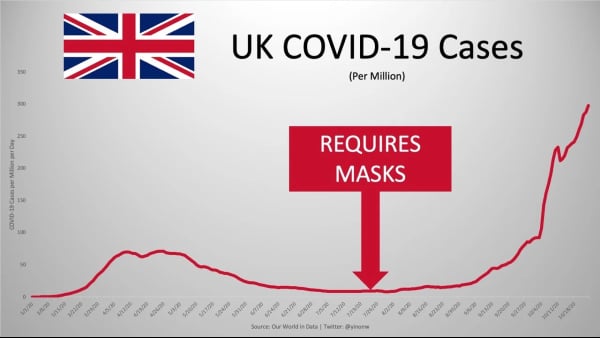 Belgium required masks shortly after the British did, and now may have the highest rate of cases in the world.

Italy has implemented one of the strictest mask laws in the world, but cases skyrocketed immediately after the mandate went into effect. 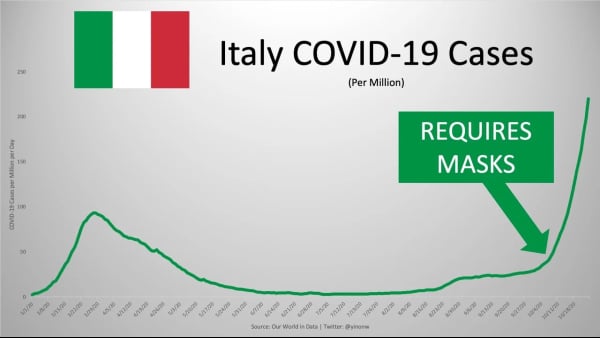 Weiss found similar results in Ireland, Portugal, Israel and many other countries.

"No matter how strictly mask laws are enforced nor the level of mask compliance the population follows, cases all fall and rise around the same time," he wrote.

The United States is no different.

California required masks in June, but cases went up by more than 300%. In Hawaii, cases rose by nearly 1,000%.

He also found that with or without mask mandates, Texas and Georgia followed nearly identical case development.

Also, overall, there was no discernable effect on the rates of deaths.

Weiss noted that the fine print on most consumer masks says they are "not intended for medical purposes and has not been tested to reduce the transmission of disease."

"Masks can work well when they’re fully sealed, properly fitted, changed often, and have a filter designed for virus-sized particles," he wrote. "This represents none of the common masks available on the consumer market, making universal masking much more of a confidence trick than a medical solution."

He argued that if "we actually wanted effective masks, then manufacturers should be conducting scientific tests evaluating masks specifically for their ability to reduce the spread of coronavirus." But many "powerful institutions have too much political capital invested in the mask narrative at this point, so the dogma is perpetuated."