For your edification, I would like to present you with a partial list of things that have been deemed racist and/or white supremacist (the two terms are often interchangeable) in the last few years. The list is growing daily, so this column can only be incomplete.

This list is only presented as a public service, so it's up to you – as a proper woke American – to avoid all the things, terms, people, subjects, foods, books, pets, diseases, locations, beverages, fashions and activities that might offend someone because of your white supremacy and privilege (even if you're not white). So without further ado, and in no particular order:

• The Winter Olympics are racist.

• Black holes (in space) are racist.

• Portland (the city) is racist.

• "The Chronicles of Narnia" is racist.

• The internet is racist.

• The military is racist.

• The Nutcracker Ballet is racist

• The outdoors is racist.

• Concern over invasive plants or animals is racist.

• The coronavirus is racist.

• Marble (for sculpting) is racist.

• English (the written language) is racist.

• English (the spoken language) is racist.

• A pro-life position is racist.

• Being nice is racist.

• Honors classes (in school) are racist.

• The Appalachian Trail is racist.

• "Objectivity" and "perfectionism" are racist.

• Being healthy is racist.

• Calling a riot a riot is racist.

• "Don't tread on me" is a racist statement.

• Freedom of speech is racist.

• The criminal legal system is racist.

• The economy is racist.

• Plants and fungi are racist.

• Condemning racism is – wait for it – racist.

• And of course, being white – by default – is racist.

I could have come up with at least 50 more examples, but in the interest of space, I had to stop somewhere. Feel free to add your own examples.

These creative and imaginative claims to racism are nothing new. As Dinesh D'Souza put it, "Racism is the witchcraft of the 21st century. Now, as then, it's hard to find witches. Many people haven't actually seen a witch. Yet powerful people create public hysteria and insist witches are everywhere. Some are invisible! Now, as then, it's about power and social control."

The left can't – or won't – let skin color go. As their extreme demands become more hysterical and ridiculous, they eternally fall back on the tried-and-true claim of "racism" whenever they don't get their way. Racism – and just about every other "ism" the left throws around – is a filler, a default term when they can't think of any other insult to lob. The accusation has historically been useful because it's impossible to prove a negative.

Character assassination is the goal. "If you are accused of racism, it is because you are a racist," observes the New York Post. "Case closed. Apologize at once and cease being so hateful. That is the current standard in woke academic thinking on race relations. … Charges of racism are usually intended to smear and, with a little luck, destroy the accused."

It's a classic Saul Alinsky tactic: If you're busy defending yourself, you can't go after the other side. Another strategy is to accuse the opposite side of that with which you, yourself, are guilty. 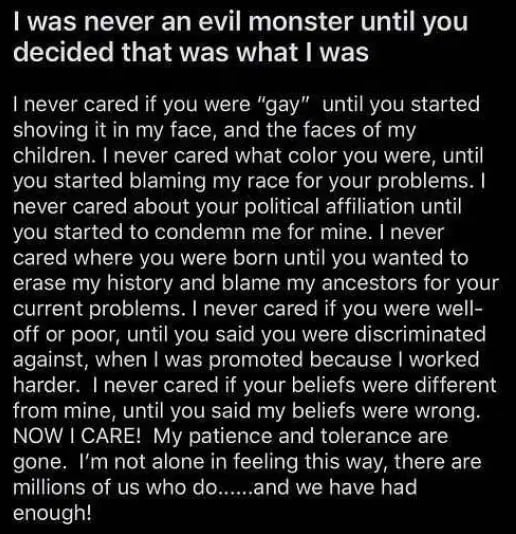 I know this is a weary cliché, but it can hardly be improved: If everything is racist, nothing is racist. That should be abundantly clear by now. If you think punctuation or solar eclipses or the Appalachian Trail are racist, then you're just being stupid.

But hey, we knew that anyway, didn't we?