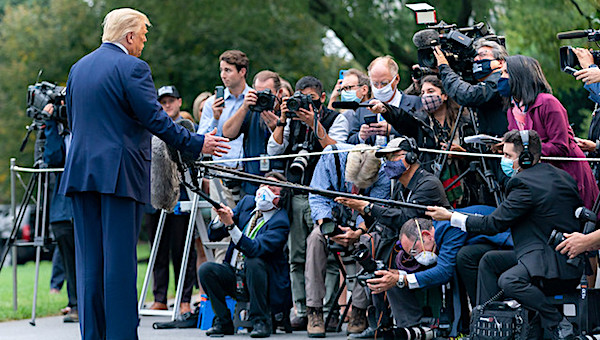 President Donald J. Trump talks to members of the press along the South Lawn driveway of the White House Saturday, Sept. 26, 2020, prior to boarding Marine One en route to Joint Base Andrews, Maryland to begin his trip to Middletown, Pennsylvania. (Official White House photo by Shealah Craighead)

The mainstream media have always skewed left in the modern era, but that didn’t mean they were parasitic vampires who fed on the misfortune of others. When Ronald Reagan — the most conservative modern president  elected prior to Donald Trump — was wounded by a would-be assassin’s bullet in 1981, the media reported the event as a matter of national and historic significance. There was no glee and no speculation about President Reagan’s karmic responsibility for his near-death experience.

As a young liberal myself then, I experienced the horror of seeing our president shot on camera and the joy of seeing our president and his wife, Nancy, wave from the window of his hospital room several days later. The shooting was a moment of unifying grief, and the rapid recovery was a moment of triumph, not just for President Reagan, but for our people as a whole. Politics be damned.

Fast-forward four decades. Welcome to “Twilight of the Media: The Week of the Vampires.” When Donald Trump revealed that he had tested positive for coronavirus, the media spoke with almost one voice: Trump got what he deserved. That was the beginning of a week that represents what one can only hope is the low point in media distortion and Fake News, but may also justifiably be described as “situation normal.” It certainly made clear to me and many others what is at stake on Nov. 3.

Pundits often claim that the 2020 election will be a referendum on Donald Trump, but that is not the case. It should now be apparent — if it wasn’t already — that the upcoming election is a referendum on the media, and their dangerous role as self-appointed arbiters of the truth. And if the media wins, Katie bar the door.

Like the shadows on the wall of Plato’s Cave, the spectral emanations of the Fake News Media tell us a version of the truth, but it is a truth that has been refracted through a distorting lens that makes everything normal look ugly and everything “Trump” look evil.

It is hard for anyone who is not chained to a rock to fathom how millions of people can accept the anti-Trump narrative that is projected 24/7 from the studios of CNN, MSNBC, CBS, NBC and the rest. Don’t these millions of people — these “likely voters,” according to multiple polls — have any perspective?

Well, no, they don’t. The problem is that so many people — smart people! — are captive audiences of the incredibly biased and hate-filled “news” coverage typified by CNN. By not exercising their God-given right to turn the channel, they are kept blissfully unaware that they are being deprived of vital information that doesn’t feed the Never Trump narrative.

Take the recent release of till-now-hidden documents revealing that the CIA, the FBI and President Obama all knew in 2016 that Hillary Clinton had a plan (as far back as July 28 of that year) “to vilify Donald Trump by stirring up a scandal claiming interference by the Russian security service” — and those sworn government officials said nothing while furthering the Trump collusion narrative.

Among other things, that news discredits the two-year long special counsel probe, justifies the firing of FBI Director James Comey, and means Donald Trump was right all along when he called the Russia Hoax the greatest political scandal in U.S. history.

Except the majority of the American public probably never even heard about these newly declassified documents. The three major traditional nightly news shows on CBS, ABC and NBC knew that the story vindicated President Trump and would hurt Joe Biden, yet they didn’t run it. And when CNN or MSNBC referenced the documents, they magically turned them into weapons against Trump. For instance, when Jake Tapper interviewed former CIA chief John Brennan, whose handwritten notes were the smoking gun that confirmed Clinton had manufactured the plot to destroy Trump, Brennan had the audacity to claim that it was Trump who was playing politics.

If the media can keep a story of this much significance buried, then clearly they are — just as President Trump claimed — acting as “the enemy of the people.”

But let’s get back to the president’s diagnosis with COVID, and his speedy recovery from it. It is a case study in media manipulation.

The New York Times was typical when it declared that “If [Trump] becomes sick, it could raise questions about whether he should remain on the ballot at all.” MSNBC’s Joy Reid raised the possibility that Trump might be faking COVID to get out of future debates with Joe Biden! Tapper condemned the president for his “wanton disregard for human life.”

When it was apparent that the president did not intend to cooperate with the “divine retribution” narrative, when it was increasingly evident that he might even recover quickly from the Chinese virus, the radicals in newsrooms upped the ante. Trump was a “super-spreader.” Not only that, he was a ghoul who had engineered the deaths of more than 200,000 Americans and must somehow be held accountable. There was talk yet again of impeachment. There was talk of invoking the 25th Amendment. Anything to make Trump look bad.

One of the most despicable moments in media malevolence came when President Trump reached out to the American people to thank them for their love and concern as he received treatment at Walter Reed National Military Medical Center. Hundreds of decent, caring people had gathered outside the hospital for days with signs of support for their president and just to gather in prayer for him. Again, millions of Americans probably never saw the scene or only heard slanted reports that these must be racist right-wing wackos who hadn’t got the memo about Trump being a menace to society.

But on Sunday, Oct. 4, the vigil suddenly became big news. Not because it represented an outpouring of love for our president, but because — according to the Fake News Media — Trump had used the crowd and the Secret Service for a self-aggrandizing “photo op” when he briefly left the hospital and drove past the well-wishers to thank them for their support.

Photo op is an interesting expression. You might well wonder what the difference is between a photo op and a historic moment when a figure of note has his photograph taken as a cherished record of the event. The answer is that if it involves Trump, it’s a photo op.

When I first heard about this impromptu gathering at Walter Reed, I sought out coverage of the event on the Internet. Thank God for Right Side Broadcasting, a little outfit based in Auburn, Ala., that has traveled the countryside since 2015 to cover President Trump’s rallies and appearances when major networks couldn’t be bothered. I watched as RSBN hosts interviewed those in attendance about why they were there and why Donald Trump meant so much to them.

These were the people whom the president wanted to thank — not a bunch of white supremacists at all. There were Filipinos for Trump, Somalians for Trump, Latinos for Trump, Vietnamese for Trump, Blacks for Trump. It was the American melting pot, and no network had any interest in showing them. It was CNN and MSNBC that turned them into props, not the president. As long as they were filmed from across the street, they could be characterized as hateful racists, plus our nation’s elite reporters would not have to get up close to all those “smelly,” maskless Trump voters who were no doubt carriers of COVID or some other disease.

One day later, the president was found by his doctors to be healthy enough to return home to the White House. This was the final straw, and the fourth estate broke under its weight. Worst of all was the moment when President Trump rose, phoenix-like, out of the ashes of his pundit-celebrated “date with destiny.” God was supposed to punish him with a slow and miserable death for not wearing a mask, but instead the president flew away in a helicopter and returned to the White House with a message for everyone who had been living in fear of COVID for the past nine months: Don’t be afraid. “Don’t let coronavirus dominate you.”

How dare he! If people had died from coronavirus, then certainly we must be afraid of it, the media voices told us. How dare he ride Marine One back to the White House? “A photo op and a power trip. A literal power trip,” said CNN’s Brian Stelter about the helicopter ride, and then he compared the moment to “what strongmen do in autocratic regimes” — as if the White House press corps had not seen the president ride Marine One hundreds of times before. That set the tone for the critiques that would follow. When President Trump waved from atop the steps of the White House and saluted Marine One as it departed, his one-time aide Anthony Scaramucci called it an American Mussolini moment. “We’ve never had a president stand on that balcony and do what he just did,” Scaramucci said inexplicably. Say what? Is waving now considered a symbol of fascism?

It was Steve Bannon who first classified the mainstream media as “the opposition party.” He was right, and if the media bloodsuckers have their way, then Trump will be defeated decisively on Nov. 3. But if that happens, it doesn’t tell us anything about Trump. What it really means is that the American public is no longer in charge. How can they be when they are entirely dependent on the shadowy half-truths and outright lies of the mainstream media to make decisions?

I wrote a book called “The Media Matrix” to describe the veil of deception that controls our social and political conversation these days, but at the time I still thought the American public could fight back and reclaim control. Now I’m not so sure. It was Marshall McLuhan who said many years ago that the medium is the message, and in the case of the 24/7 news coverage on TV and Internet, the message is power — raw, unfiltered, corrupting. President Trump exposed it, but in the end he may not be able to defeat it.