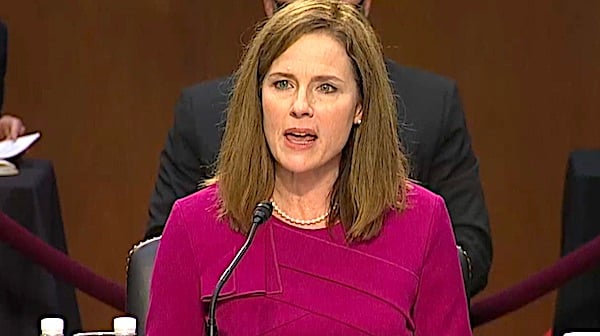 U.S. Supreme Court nominee Amy Coney Barrett, presently a judge on the 7th U.S. Circuit Court of Appeals, told senators on Monday she believes in the power of prayer.

Democrats, who are adamantly opposed to President Trump's decision to fill the seat left vacant by the death of Ruth Bader Ginsburg, attacked her faith during her appeals court confirmation, charging the "dogma lives loudly within you," even though the U.S. Constitution forbids a religious test for public office.

At the opening of her Senate hearing on Monday, she recalled the late Justice Antonin Scalia, for whom she clerked. Scalia, she noted, believed the law must be applied "as it is written," not as a judge wishes it were written.

"That is what it means to say we have a government of laws not of men," she said.

Courts are not designed to "solve every problem or right every wrong."

And policy decisions, she said, must be made by the legislative and executive branches.

"I believe in the power of prayer," she said, while thanking Americans who have offered her their prayers and support.

Meanwhile, Senate Majority Leader Chuck Schumer has declared Democrats will not supply a quorum for votes on Barrett.

In the full Senate, the quorum, the minimum number of senators needed for a vote, is 51 members. In the Judiciary Committee, a quorum is nine members, including two in the minority Democratic Party.

"We will talk about when the actual vote occurs in committee and on the floor. Democrats will not supply the quorum," Schumer said. "Period."

While a Democrat boycott could cause a delay, it's not likely to alter the outcome.

Fox News said: "Most notably, the Senate can vote on a discharge resolution that would remove the responsibility of considering the Barrett nomination from the committee, allowing Senate Majority Leader Mitch McConnell, R-Ky., to call the nomination for a full vote. The committee itself could also change its rules to get rid of the requirement that two Democrats be present, James Wallner, a senior resident fellow for governance at the R Street Institute told Fox News."

Wallner said the Democrat are trying to make it "as painful as possible" for Republicans.

Senate Democrats refused to participate in the usual round of courtesy by the nominee.

Sen. Ted Cruz, R-Texas, said he believes the Democrats will line up "some more procedural games and shenanigans."

Democrats have called the nomination process on the eve of a presidential election illegitimate and even "unconstitutional."

However, there is nothing in the Constitution that prevents a president from nominating a Supreme Court justice at any point in his term.