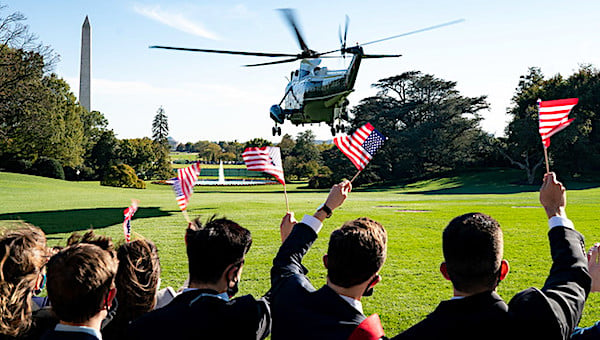 Big tech companies "have the power" to decide the presidency, warns Brent Bozell, the founder of the watchdog Media Research Center.

Bozell, whose MRC publishes Newsbusters and CNSNews, noted in "The Daily Signal Podcast" that researcher Robert Epstein, "a liberal Democrat," found that "by manipulation of the data," Google, moved up to 3 millions votes from Donald Trump to Hillary Clinton in the last election.

"And he’s shown that in this election cycle ... Google is going to be able to move up to 15 million votes from the Trump camp to the [Joe] Biden camp through data manipulation," he said.

"This is serious stuff. This is far more serious than anything we’ve ever seen before. This shows that these tech companies have the power to decide who will and who won’t be the president of the United States. And if that doesn’t scare people, nothing will," Bozell said.

Bozell also founded, in 2010, ForAmerica, which is dedicated to restoring America to its founding principles.

The discussion turned to the censorship by Facebook and Twitter of the New York Post stories reporting emails damaging to Joe Biden's campaign that purportedly were found on a laptop abandoned by his son Hunter Biden.

"Facebook has an audience of 2.7 billion people worldwide. Twitter is the news source worldwide for everyone today. If you want to get your story out, you can go to NBC News and they have 4 million, or you could go to Facebook," Bozell noted. "Remember this statistic, they asked young people, where do they get their news? They didn’t say ABC News. They didn’t say the New York Times. Sixty-eight percent said Facebook. That’s how powerful these tech companies are today. Much more powerful than the traditional news media."

So an "explosive" story comes out that would have every network "camped outside the White House" if it involved the Trumps, he said. But because it's about the Bidens, the media's response is "crickets."

Bozell noted that Facebook broke its own policies to try to suppress the New York Post stories, censoring the initial story even before it was fact-checked.

"This shows the extent to which Facebook does not want that story up. They didn’t wait for fact-checkers. There’s nothing wrong with the story. They just said, 'We’re not going to run it and that’s that,'" he said.

Bozell noted the fact that YouTube plays 5 billion videos every day and that Google has 92% of the search engine traffic.

"So what does that mean? Well, if you’re Dennis Prager and you’ve got this incredible operation where you’ve got these videos that are just top-shelf, that could be run at SMU or Yale or some such place, they’re that good quality and they’re demonetized by YouTube," he said. "And they come up with those incredible excuses for it. He does one on the Ten Commandments and they say it’s too violent because of the fifth commandment. And they take down, they demonetize it."

The organization documented "over a hundred examples of deliberate and a bias against conservatives."

"I’ll show you one, it just came out today. We just posted it today. Facebook and Twitter, about 99% of this is Twitter, since the start of the campaign have banned Trump material 65 times. Guess how many times they’ve banned Biden material?

Bozell said that at the time Zuckerberg expressed an understanding of Silicon Valley's left-wing bias and the problem of censoring conservative ideas.

They discussed "what kind of oversight and fact-checking ought to be advanced," Bozell said, "and I pushed afterward the idea that there should be none."

"If you want it to be the open marketplace of ideas, what you do is you do censor egregious criminal activity, you do censor pedophilia, you do censor terrorism," said Bozell. "There are things, clear-cut things that you censor, but that’s it."

Bozell said that Zuckerberg made some moves to curb the bias but they didn't last.

"They got rid of all of these people, and they announced that. But, it’s, I guess, like hemorrhoids, they keep coming back and you can’t get rid of them," he said. "That’s the culture of these tech companies, dominated probably 99% by leftists working in there."

Bozell said the values of the left don't align with "American values."