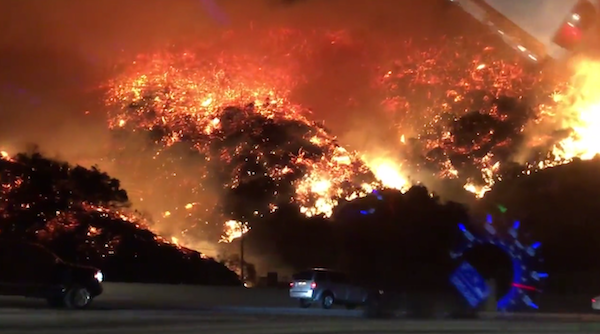 As California burns, Governor Gavin Newsom fiddles – with California’s climate change goals. In response to record-breaking wildfires, the Governor announced that California must accelerate its goal of reaching 100 percent green electricity by 2045. And on September 23, as dark smoke infiltrated our lungs and millions of acres burned, the Governor issued an executive order, requiring the sale of all new cars to be zero-emission by 2035.

But pronouncing distant goals does nothing to reduce the risk of devastating wildfires over the next decade and beyond.

None of this means that California should cease its efforts to reduce its carbon footprint. But it does mean that California must adopt a more effective, data-based policy for the following reasons:

First, by failing to take sweeping action to address the growing fire risk, the State is actually undermining its climate change goals. The 2018 fires alone released more than 45 million metric tons of carbon dioxide into the atmosphere, producing over nine times the emissions that were reduced in 2017, according to Beacon Economics. This year’s record-breaking fires will further set back California’s efforts.

Second, California government has utterly failed to conduct any cost-benefit analysis in setting its green energy goals. A review of the legislative reports behind the 2018 legislation, requiring 60 percent of electricity to be derived from renewable energy resources by 2030 and setting a goal of achieving 100 percent renewable or zero-carbon electricity by 2045 reveals an utter lack of empirical analysis regarding the goals’ impact on energy reliability or electrical costs. As a result, electricity prices in California have increased five times as fast as the national average since 2011, affecting jobs and incomes.

Separately, the California Independent System Operator has warned the Public Utilities Commission that California risked energy shortages by shutting down traditional power plants in favor of solar power, which can generate 20-25 percent of the State’s supply, but which vanishes in the evening. That prediction came true this year when a prolonged heat wave resulted in rolling power outages. Yet, California advances its renewable energy goals without assuring energy reliability.

Third, our aging energy infrastructure can spark wildfires when stormy or windy conditions damage transmission lines. After all, the equipment that caused the Paradise fire was on a line built in 1921. However, diverting utilities’ resources to develop more expensive green energy sources has left them without sufficient resources to undertake the necessary, but massive, effort to harden their energy infrastructure.

This year’s record-breaking fire season demonstrates that the State needs to take a less doctrinaire and more pragmatic approach toward addressing climate change. This includes the following:

1. Authorizing a sufficient number of traditional power plants that can immediately supply dependable energy when there are energy shortfalls, as we increase reliance on renewable energy.

2. Implementing a massive program to thin forests and clear them of deadwood. Last month, the Governor and the U.S. Forest Service announced a future joint effort to reduce wildfire risks across one million acres a year through controlled burns and debris removal. By contrast, in an average year, Florida’s state forest service authorizes 2.1 million acres of controlled fires, according to its agriculture department.

It is time for pragmatic leadership that protects the public today because tomorrow’s goals are no substitute for today’s action.

Dan Kolkey is a former judge and former counsel to Governor Pete Wilson and serves on the board of the Pacific Research Institute.