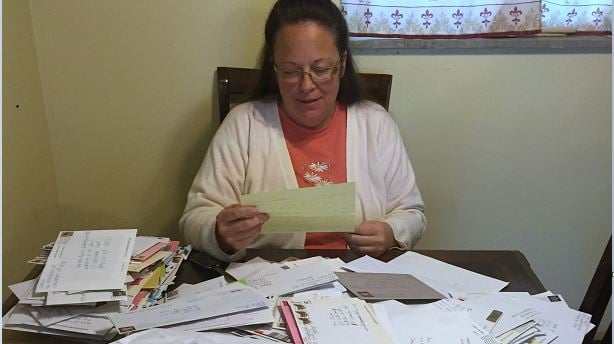 That, in effect, was the message from U.S. Supreme Court Justice Clarence Thomas after the eight-member high court declined to review a lawsuit against Kim Davis, the Kentucky county clerk who in 2015 was jailed for refusing to process marriage licences after the Supreme Court created a right to same-sex marriage.

Thomas wrote Monday in a statement joined by Justice Samuel Alito that Davis "may have been one of the first victims" of the Supreme Court's "cavalier treatment of religion" when it issued its same-sex marriage ruling, "but she will not be the last."

Davis, who was the clerk of Rowan County, was briefly jailed five years ago by federal judge David Bunning for contempt of court.

Thomas called Davis a "devout Christian" who "found herself faced with a choice between her religious beliefs and her job."

"Due to Obergefell, those with sincerely held religious beliefs concerning marriage will find it increasingly difficult to participate in society without running afoul of Obergefell and its effect on other antidiscrimination laws," Thomas wrote. "Moreover, Obergefell enables courts and governments to brand religious adherents who believe that marriage is between one man and one woman as bigots, making their religious liberty concerns that much easier to dismiss."

Thomas and Alito agreed, however, that the Supreme Court should not grant Davis' appeal.

"This petition implicates important questions about the scope of our decision in Obergefell, but it does not cleanly present them," Thomas wrote.

The Supreme Court's rejection clears the way for a lawsuit brought by same-sex couples. The 6th U.S. Circuit Court of Appeals has ruled there was a "plausible case" that as a individual she violated their rights.

Davis was appealing a 6th Circuit ruling arguing the law "treats Davis not as one person, but as two: an official and an individual."

"The doctrine of sovereign immunity shields Davis as an official if, when refusing to issue marriage licenses, she acted on Kentucky's behalf – but not if she acted on Rowan County's behalf. And the doctrine of qualified immunity shields Davis as an individual if she didn't violate plaintiffs' right to marry or, if she did, if the right wasn't clearly established when she acted," the 6th Circuit said.

In his statement Monday, Thomas said the Supreme Court recognized a right to same-sex marriage "even though that right is found nowhere in the text" of the 14th Amendment.

"Several members of the court noted that the court's decision would threaten the religious liberty of the many Americans who believe that marriage is a sacred institution between one man and one woman. If the states had been allowed to resolve this question through legislation, they could have included accommodations for those who hold these religious beliefs," he said.

"The court, however, bypassed that democratic process. Worse still, though it briefly acknowledged that those with sincerely held religious objections to same-sex marriage are often 'decent and honorable' … the court went on to suggest that those beliefs espoused a bigoted worldview…"

Thomas noted that the four justices who didn't agree with the ruling "predicted that 'these … assaults on the character of fair-minded people will have an effect, in society and in court.'"

"Those predictions did not take long to become reality," he wrote, citing the Davis case.

The former county clerk is a Christian, he said.

"When she began her tenure as clerk, Davis' sincerely held religious beliefs – that marriage exists between one man and one woman – corresponded with the definition of marriage under Kentucky law," Thomas said.

At the time, she was lobbying for amendments to state law to protect religious rights, he said.

"But those efforts were cut short by this court's decision," he said.

"As a result of this court's alteration of the Constitution, Davis found herself faced with a choice between her religious beliefs and her job. When she chose to follow her faith, and without any statutory protection of her religious beliefs, she was sued almost immediately."

Thomas warned that "those with sincerely held religious beliefs concerning marriage will find it increasingly difficult to participate society without running afoul of Obergefell and its effect on other antidiscrimination laws."

He pointed out that even courts are infected with anti-Christian bigotry, with "one member of the Sixth Circuit panel in this case [describing] Davis' sincerely held religious beliefs as 'anti-homosexual animus.'"

"Since Obergefell, parties have continually attempted to label people of good will as bigots merely for refusing to alter their religious beliefs in the wake of prevailing orthodoxy," he said.

He said Obergefell will continue to have "ruinous consequences for religious liberty."

"It is appalling that five years after the historic decision in Obergefell, two justices still consider same-sex couples less worthy of marriage than other couples. When you do a job on behalf of the government — as an employee or a contractor — there is no license to discriminate or turn people away because they do not meet religious criteria," the ACLU said.

But Liberty Counsel, which has defended Davis, said the two justices appear to be inviting future challenges to the Obergefell ruling itself.

The legal team pointed out that Thomas said "the court has created a problem that only it can fix."

"Even though the High Court declined to take up qualified immunity, Justices Thomas and Alito are inviting future challenges regarding Obergefell and to fix the mess the court created," said Liberty Counsel Chairman Mat Staver.

The organization has explained that the law was uncertain at the point the dispute arose, because while the Supreme Court can strike down a law, it cannot rewrite a state statute.

The state legislature was required to do that, and it had not acted yet when the dispute erupted. It happened because several same-sex couples bypassed other jurisdictions where they could have obtained licenses to target Davis with lawsuits.