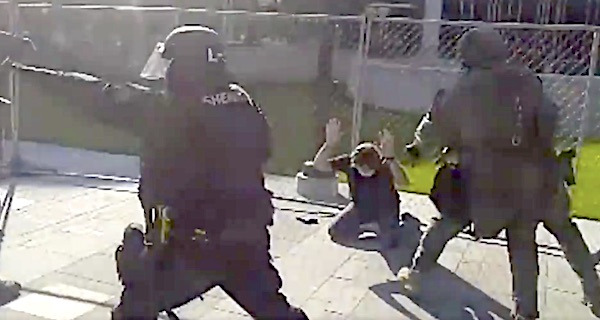 The fatal shooting in Denver of Lee Keltner, 49, during a clash between competing rallies over the weekend is just one of many in recent months amid Black Lives Matter protests since the death of George Floyd.

But the shooting of Keltner may have a longer reach than others since he had been hired by a Denver television station, KUSA-TV, to act as a security guard for reporters at the events.

The Denver City Attorney's office said that when the homicide investigation is concluded, the case might not be over.

Civil actions could be taken against the man charged in Keltner's death, Matthew Dolloff, and against "Pinkerton, 9News, and/or any other entity that hired and deployed Dolloff in an unlicensed security guard capacity."

The city's Department of Excise and Licenses has confirmed Dolloff did not have an active security guard license when the shooting happened.

KCNC-TV in Denver reported Keltner allegedly tried to spray Dolloff with mace, and Dolloff fired at him.

Officials at KUSA-TV said they contracted for Dolloff's services through Pinkerton.

"9NEWS continues to cooperate fully with law enforcement and is deeply saddened by this loss of life," the station said. "For the past few months, it has been the practice of 9NEWS to contract private security, through an outside firm, to accompany our personnel covering protests. Pinkerton, the private security firm, is responsible for ensuring its guards or those it contracts with are appropriately licensed. 9News does not contract directly with individual security personnel."

Denver prosecutors said they will "weigh any additional criminal charges related to the defendant possibly operating as an unlicensed security guard once the Denver Police Department completes its homicide investigation."

The New York Daily News reported Carol Keltner, who identified herself as Lee Keltner's mother, said her son was at a rally when "a person on the [Black Lives Matter] and Antifa side went up to him said a few nasty words then shot him in the head. He was murdered because he backed the police."

The Gateway Pundit reported the rally Keltner attended was set up by Patriot Muster, a gathering of conservative activists in Denver.

"In response to the 'Patriot Muster' the local gang of Antifa members gathered at the same time with a counter-protest," the Gateway Pundit said. "After the event, the Antifa related individuals began harassing members of the Patriot Muster. This is when the murder occurred."

Denver police claimed the shooter did not have any ties to the militant leftists.

But the article said a review of Dolloff's history found he has been connected "with radical far-left movements like Occupy Denver and Antifa."

He made numerous anti-Trump and radical left posts on social media, including posts against police and sharing "Occupy Denver/Democrats" items.

Further, the site explained, it "showed pictures from the event where Keltner and Dolloff face off and have provided a video of the event:

#Breaking: Video shows the moments a shooting occurs at the #Denver protest. One person was reportedly shot and one person has been arrested. The reason for the shooting is unclear. pic.twitter.com/UWVNOwlOKi

#Breaking: Video shows the moments a shooting occurs at the #Denver protest. One person was reportedly shot and one person has been arrested. The reason for the shooting is unclear. pic.twitter.com/UWVNOwlOKi

The Gateway Pundit also noted there appeared to be provocation by a BLM activist when the victim was shot.

Related column: The media-political assassination of a patriot in Denver by Michelle Malkin