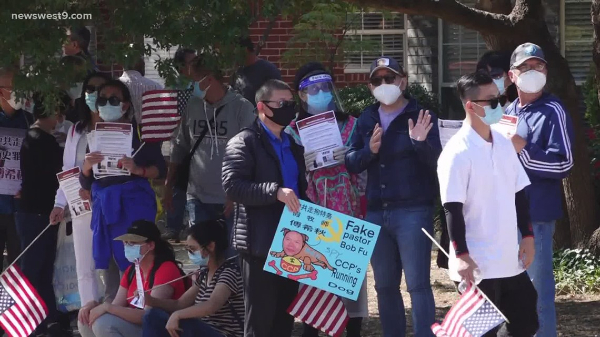 An exiled Chinese pastor who leads a Texas-based organization assisting Christians in China has been targeted with protests, harassment and death threats initiated by a Chinese multi-millionaire.

KOSA-TV in Midland, Texas, reported Kwok, who the New York Times called an "exiled billionaire whistle-blower," announced via YouTube he was sending protesters to Fu's house because he says Fu is a communist spy.

Fu, the founder of ChinaAid, says it is Kwok who is the communist.

The pastor has been forced to move his family to an undisclosed location for their safety, according to his organization, but he "is not yielding to these acts of terrorism that are attacks on every pastor of every church in this country."

In a statement, China Aid Association said protesters gathered Sept. 26 outside of Fu's house while he was out of town and his wife and children were home.

Since then, the number of protestors and the calls for violence have increased. On Oct. 5, it escalated when a bus with more than 50 protesters showed up outside Fu's home.

A local news station, NewsWest 9, reported the scene of busloads of protesters lining the street outside Fu's home was "almost stranger than fiction."

NewsWest 9 said it spoke to a few of the protesters, who say they are from the United States but won't identify themselves or what state they are from. One protester told the station his name was Texas Cowboy.

Midland Mayor Patrick Payton and police said the protesters are being paid to travel to Midland and protest outside of Fu's home.

One neighbor said they are getting paid $500 a day but the station could not confirm the information.

Midland's mayor, area pastors and Fu's neighbors deny he's a spy and believe he has become a target because he has been outspoken against communist China.

Jenny Cudd, who has worked with Fu, told NewsWest9 she believes the Chinese Communist Party is trying to discredit Fi.

"It is an organized effort, we literally saw them coming off buses yesterday and they were handed a sign, flag or a Bible," Cudd said. "I don’t know about you, but I don’t trust anyone who was bussed in to protest something."

She said Fu has spoken out against communist China "for decades and decades and helped persecuted Christians in China, trying to get them out."

ChinaAid plans to hold a rally Thursday at noon at the Midland County Horshoe Arena in Midland.

"Communism has reared its evil head in the U.S.A. in 2020 in a more direct way than since the peak of the Cold War years and fall of the U.S.S.R.," ChinaAid says.

The organization sees it as a "direct attempt to silence pastors, churches and the work of the Gospel both here and in China."

The U.S. Pastor Council is joining other ministries and leaders in calling on pastors from "every color, every corner" of the U.S. to support Fu and the other persecuted pastors

"I pray God uses this threat to expose the Chinese communists' agenda to destroy Christianity," said Fu. "Americans in general and Christians specifically need to know what is really happening in China and now even here in the USA. Please pray for me and my family."

Fu took part in the Tiananmen Square protests of 1989 and became an underground house church pastor. He fled China with his wife in 1996 due to religious persecution by the Chinese Communist Party.

Guardians of the swamp