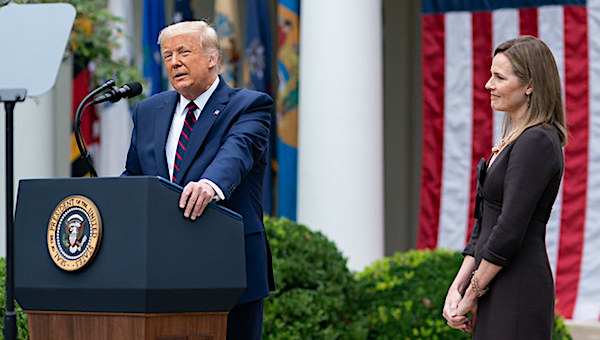 President Donald J. Trump announces Judge Amy Coney Barrett as his nominee for Associate Justice of the Supreme Court of the United States Saturday, Sept. 26, 2020, in the Rose Garden of the White House. (Official White House photo by Andrea Hanks)

Democrats are creating a new "rule" for confirming Supreme Court nominees based on how lawmakers think he or she might vote, writes George Washington law professor Jonathan Turley.

Calling it the "Barrett Rule," he says it "would allow not only for the packing of a court but the packing of the court with guaranteed ideological drones."

"It is court packing without any pretense. Like our current politics, it would finally strip away any nuance or nicety. The court, like Congress, would become subject to raw and brutal politics at its very worst," Turley writes on his website.

As the Senate Judiciary Committee interviewed Judge Amy Coney Barrett this week, there were "a host of legitimate questions to be raised."

But "the thrust of the entire hearing was that Barrett was unqualified due to her expected vote in the upcoming case on the Affordable Care Act (ACA)."

"Various senators directly stated that they would vote against Barrett to protect the ACA. That is what is so unnerving about the Barrett confirmation hearing," he writes.

Barrett's confirmation hearing "could easily have been mistaken for the sentencing hearing for John Wayne Gacy."

"Surrounding Barrett were huge pictures of sick individuals. One would think that Barrett was being confronted with the faces of her victims. In reality, the pictures perfectly captured a far more important message. Senators had finally broken free from any pretense of principle in reviewing the qualifications of a nominee. Indeed, many are about to create a new rule, the Barrett Rule, allowing conditional confirmation voting. The pictures were meant to pressure Barrett to either satisfy senators that she would vote against an Affordable Care Act challenge or they would vote against her confirmation."

Turley argues the Constitution allows senators to vote for or against a candidate for any reason "or no reason at all."

But in the past, a "lack of qualifications" often has been the reason for opposition.

This year, Democratic members "have struggled with changing rationales for voting against Barrett, who has impeccable credentials as an accomplished academic and respected jurist."

"Court packing is the expansion of the Court to create a dominant ideological majority," he points out.

That left senators "with a rare moment of clarity."

Sen. Cory Booker, D-N.J., he notes, announced that he would vote against Barrett even before hearing her because she might vote against the ACA.

"We have now reached the Rubicon of confirmation politics. Thirty-three years after the [Robert] Bork hearing, senators are now stripping away any pretense or nuance: they will oppose Barrett because of her expected votes on cases," he writes. "In particular, Democrats have been arguing that they will vote against Barrett to prevent her from voting on a pending case, California v. Texas, dealing with the constitutionality of the ACA. Sen. Mazie K. Hirono (D., HI) announced recently that she would vote against Barrett because 'she will vote to strike down the Affordable Care Act.'"

Senate Democrats, he writes, have invoked "the right to vote against a nominee on the basis of her expected vote on this pending case."