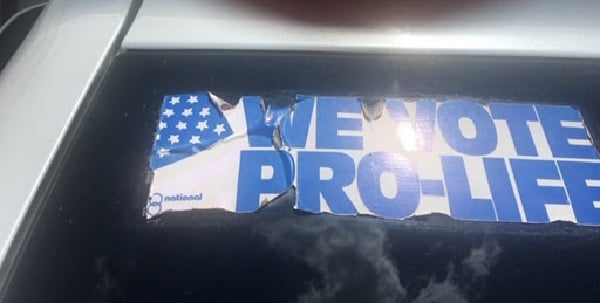 A North Carolina election official's free speech rights have been upheld after her boss in the county Board of Elections office ordered her to remove a "We Vote Pro-Life" bumper sticker from her personal vehicle.

The dispute arose, according the American Center for Law and Justice, when a supervisor ordered Lorraine LeGates to remove the tattered "We Vote Pro-Life" bumper sticker from her van. LeGates was told it was "inappropriate for someone working in the elections office and, moreover, was a violation of North Carolina law."

"It's hard to imagine a less offensive bumper sticker than the generic 'We Vote Pro-Life' sticker we've all seen while sitting in traffic or maybe walking through our church's parking lot," the ACLJ said.

"Nothing in your face. Just four words, usually superimposed on an American flag-type background."

Legates was skeptical about the removal order, so she contacted the ACLJ, which investigated and responded with a letter presenting a legal argument for her sticker.

"Lorraine presented our letter to her boss who passed it along to the County Attorney," the ACLJ said. "We're happy to report that the County Attorney agreed with our interpretation. Lorraine and her family are keeping 'We Vote Pro-Life' on their van – although they have replaced the worn-out sticker with a fresh one!"

The ACLJ said that in its letter, it established the fact that LeGates' car "was her family's car, not owned by the county, with nothing on the car to identify it as belonging to anybody connected with the Board of Elections."

"The car was never parked in a county parking lot; rather, like other county employees, Lorraine parked in whatever parking spaces happened to be available along the public street where the building housing the Board of Elections and other tenants was located."

Was the supervisor's order to remove the bumper sticker due to an honest misunderstanding of the law?
4% (17 Votes)
96% (366 Votes)

In the letter, the ACLJ stated to LeGates: "The directive you were given is not supported by a reasonable application of controlling First Amendment jurisprudence or North Carolina statutes. In fact, such a directive appears to be a clear violation of your rights."

The organization argued the Supreme Court already has ruled that public employees have a right to speak on issues of public concern.

"Under the Supreme Court's long established public employee speech jurisprudence, your display of the 'We Vote Pro-Life' message is constitutionally protected," the letter says. "The bumper sticker is clearly an expression of your viewpoint as a private citizen on an issue of public – not private, nor job-related – concern. Your display of it on a private vehicle which is not in any way identified with the Board of Elections, on a public street on which any citizen is free to park, cannot even remotely be viewed as interfering with the efficient and effective operation of the ... board of elections."

The ACLJ said that any orders to remove the bumper sticker "would be a violation of your rights."