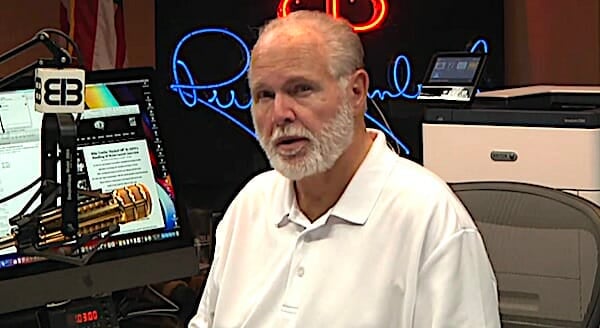 With the possibility of riots across America in the wake of Election Day, radio star Rush Limbaugh is suggesting a potential solution to end domestic terror: send the rioters to the U.S. military base in Cuba.

"I think we're getting close to the point – we've got Club Gitmo down there. We got Guantanamo Bay," Limbaugh said Wednesday on his national broadcast.

"If we're gonna have a bunch of domestic terrorism, then let's capture these people and send them down there and put them in jail. Enough of this. This stuff has to end.

"And if local law enforcement is not gonna do it for political reasons, then other steps and other measures need to be taken, because we're talking about public health and public safety. And the reason stuff hasn't been done now is simply because the Democrats in these cities and states have been trying to set things up where Trump gets punished politically for all of the unrest."

"If Trump wins, the left is going to riot like they always do," he said.

"There is no plan for unity because it isn't possible. Now, I don't want to be Mr. Pessimism or Mr. Negative here. I'm the mayor of Realville here. There's no way these people are gonna lay down arms or lay down opposition. There's no way they're gonna unify with us. That's not what they're about. It's going to be vicious. If Trump wins, there will be riots just like there were in 2016 into 2017. They're already making plans for it. The way you stop riots is law enforcement. Is law enforcement gonna do anything? We'll have to wait and see."

"I think heads need to roll. I think heads need to crack. If there's any kind of civil unrest where property is being destroyed, people are being hurt, mayhem is happening, it's got to stop. Law and order must triumph and prevail. But that's what this past year has been about: Defunding the police for doing their job.

"I know at the root of this that everybody wishes that there would be unity, that we could just put all this stuff aside and can't we all just get along? Can't we just find whatever we have in common and build on it? That'd be great, but there isn't anything we have in common, folks. That's why I keep saying these people have to be defeated every chance there is to defeat them."