Americans are facing a presidential election more crucial to their freedom and wellbeing than perhaps any election in their nation’s history – and yet which has become a total charade, a farce, a massive pretense in every way.

Virtually the entire “mainstream media” – the Democratic Party’s propaganda wing – loathes the fearless incumbent Donald Trump, even as he suffers from COVID-19. What does it matter that he resurrected the U.S. economy, made America energy-independent, destroyed the ISIS caliphate and largely kept his campaign promises, all while fighting off a never-ending coup d’etat against him? Most media figures hate him, while fiercely supporting – and actually pretending to venerate – the challenger, Joe Biden, a feeble, unprincipled, constantly lying and shockingly corrupt do-nothing career politician whose mental disintegration is now so obvious and advanced that he can barely speak coherently without a teleprompter or days of rehearsals.

Everyone paying attention, of course, realizes that Joe Biden is simply a smiling, failing and soon-to-be-discarded Trojan horse, in the bowels of which impatiently crouch the radicals, socialists and Marxist revolutionaries who plan to burst out and rule America should Biden win. That includes, first and foremost, his running mate, Sen. Kamala Harris, who the independent GovTrack.us “ranked most liberal compared to All Senators” in 2019 – that is, further left than flaming socialist Bernie Sanders.

So, with Election Day in less than a month, let’s venture a little deeper than the usual formulaic analyses pundits offer to explain today’s surreal political landscape.

In fact, let’s start with one utterly obvious truth that almost no one is willing to publicly express: Today’s Democratic Party is insane.

Consider the classic, oft-cited example of a true statement so clearly self-evident that everybody acknowledges it: “2+2=4.”

* The Democratic Party insists it can change the earth’s weather by adopting a bizarre socialist-totalitarian program that would completely destroy the U.S. economy, eradicate Americans’ constitutional rights, kill millions of jobs and plunge the nation into inescapable chaos, anarchy and depression. The Green New Deal’s estimated cost approaches $100 trillion, more money than the gross world product – that is, the annual economic output of every nation on earth combined.

* In an era of skyrocketing violent crime, the Minneapolis City Council recently pledged not to merely “defund,” but to entirely “dismantle” its city's police department, while over a dozen other U.S. cities have promised to “defund” theirs. Meanwhile, as Democrat officials demonize America’s police as racist bullies and prosecute innocent citizens for defending themselves against violent mobs, they are also freeing thousands of criminals from prison, ending cash bail so offenders can get back on the street immediately after being arrested to offend again, and encouraging violent revolutionary mobs to rob, loot and burn America’s cities night after night. And then they blame it all on Trump.

* Sen. Bernie Sanders, who many believe would largely set the agenda for a Joe Biden administration, has publicly insisted that Boston Marathon bomber Dzhokhar Tsarnaev, who killed three people including an eight-year-old boy and injured 280 others, must be allowed to vote from prison, along with all other convicted felons in the country.

* The Democratic Party, including Joe Biden and Kamala Harris, have abandoned their former “safe, legal and rare” mantra regarding abortion and now insist a beautiful, full-term human baby just about to be born is not really a person at all, and therefore can be slaughtered at will, even after he or she is born – as long as “the mother and her doctor” agree.

* Democrats also agree there are more than 100 different genders, not just the two that existed from the dawn of mankind on earth until sometime last year, and insist that men can get pregnant and have babies and that taxpayers must fund pregnant men’s abortions. And, if you don’t agree with these extreme delusions, you’re an anti-science bigot.

Got it? These are the people who believe they’re much more intelligent and moral than you, and who, in just a few weeks, fully intend to take over America forever.

"If the Democrats win,” Rush Limbaugh said recently, “that's the end of democracy. It's the end of the two-party system. We're gonna have a one-party government that is going to devote itself to eliminating all opposition. That's what's at stake. If they win, I think the Republican Party essentially ceases to exist."

How is that even possible, seeing as America has been a two-party system for centuries?

"One of the first things they will do,” explained Limbaugh, “is grant statehood to D.C. and Puerto Rico, and that will give them four Democrat senators. They will never lose control of the Senate. They will never lose control of the House. They will pack the Supreme Court with who knows how many new justices, and they'll all be left-leaning justices. And it won't take them long to do any of this. And after they've done it, there will be a one-party state. The United States will be a one-party government."

What would America look like under permanent Democrat rule? Limbaugh echoes what others have also predicted: The entire U.S. would become like California.

Once the most loved and admired state in the union – perfect weather, fantastically fertile land, the Pacific Ocean – California had everything. But today much of the state resembles feudal medieval Europe, with the middle class rapidly fleeing or disintegrating, leaving the state to a super-rich elite class in gated communities with private security, surrounded by large areas populated by multitudes of homeless drug addicts and other lost souls living in unthinkable filth and squalor, human feces and drug paraphernalia everywhere, and marked by the frightening re-emergence of long-conquered diseases like typhus, typhoid fever, tuberculosis and the bubonic plague.

What has driven the Democratic Party to this advanced state of madness?

All of this behavior is clearly irrational, immoral, totalitarian and, yes, insane. But then, that’s exactly what “full-fledged Marxist radical left” has always meant.

Marxism is in complete rebellion against God, against His commandments, against His morality, against the very idea of objective truth. Marxists want their own truth, their own laws, their own morality, their own biology, their own science, their own heaven – on earth. They want nothing to do with God or the Judeo-Christian culture that comprised the moral foundation of America and Western Civilization – which they openly hate.

At its deepest level, of course, we’re talking about a war between good and evil.

Hit the pause button: None of this is to say that our Democrat countrymen are evil – most are not, but they have been powerfully indoctrinated, intimidated, brainwashed. Their hatred of Trump – and of America herself as a “systemically racist” nation – combined with the Marxist indoctrination dished out by almost all U.S. colleges and reinforced by today’s “fake news” disinformation media and radically intolerant “cancel culture,” has rendered them guilt-ridden, monumentally deceived and very angry. But they are not our enemies; they’re our brothers and sisters who are enslaved by an enemy power that has, for the time being at least, totally captured their minds and loyalties. Some of them will one day wake up and come back to sanity, especially the young.

In the meantime, vote for Trump like your country and your freedom depend on it, because they most certainly do.

Limbaugh also predicted that if Democrats lose in November, "They're going to engage in violence like you haven't seen yet."

And what does President Donald Trump himself say about all of this? During a late-August visit to Old Forge, Penn., Trump candidly told supporters:

“At stake in this election is the survival of our nation. It’s true, because we’re dealing with crazy people on the other side. They’ve gone totally, stone-cold crazy.”

“If you want a vision of your life under a Biden presidency, think of the smoldering ruins in Minneapolis, the violent anarchy of Portland, the bloodstained sidewalks of Chicago, and imagine the mayhem coming to your town and every single town in America.”

“They’re coming to get you. ... and me. We, we’re the wall between the American Dream and total insanity, and the destruction of the greatest country in the history of the world.”

“They want to cancel you. Totally cancel you. Take your job, turn your family against you for speaking your mind while they indoctrinate your children with twisted, twisted worldviews that nobody ever thought possible.”

“Joe Biden is the candidate of these privileged liberal hypocrites who hold you and your values in disdain. But you can send them all a thundering message on Election Day by voting for Trump-Pence.” 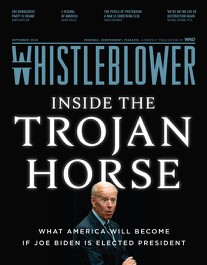 Editor’s note: To explore this subject more deeply, see the current issue of WND’s acclaimed Whistleblower magazine, edited monthly by David Kupelian, titled “INSIDE THE TROJAN HORSE: What America will become if Joe Biden is elected president.” The issue is also available in state-of-the-art digital form. Better yet, SUBSCRIBE TO WHISTLEBLOWER (print edition) and get 12 fantastic issues or else get an ANNUAL DIGITAL SUBSCRIPTION.

David Kupelian
David Kupelian is an award-winning journalist and bestselling author of "The Marketing of Evil," "How Evil Works" and “The Snapping of the American Mind.” Follow him on Facebook.
Restoring election integrity: The one and only way to save America from tyranny and destruction
Biden's monumental game of Chicken
How the 2020 election was stolen from Donald Trump
COVID lies: The most dangerous plague of all
WND is facing an existential threat. How you can help
See more...