The Justice Department has charged eight people with allegedly conspiring to operate inside the U.S. as agents of the Chinese government while attempting to intimidate U.S. residents into returning to China.

In a media release published on Wednesday, the DOJ, along with the FBI, accused the individuals of engaging in a "campaign to harass, stalk, and coerce certain residents of the United States to return to the [People's Republican of China] as part of a global, concerted, and extralegal repatriation effort known as 'Operation Fox Hunt.'"

The DOJ noted, “In furtherance of the operation, the PRC government targets Chinese individuals living in foreign countries that the PRC government alleges have committed crimes under PRC law and seeks to repatriate them to the PRC to face charges.”

Per the Justice Department release, the suspected Chinese operatives were “acting at the direction and under the control of PRC government officials.”

This morning, #FBI Director Christopher Wray joined our partners @TheJusticeDept and @EDNYnews to announce charges against eight defendants for conspiring to act as illegal agents of China during a multi-year harassment campaign directed at U.S. residents. https://t.co/khWMcn1rph pic.twitter.com/CXrQ9dmWcH

Five of the suspects have been arrested, and three are still at large.

FBI Director Christopher Wray issued a statement on the arrests and alleged activities of the defendants suspected in the campaign.

“The Chinese government’s brazen attempts to surveil, threaten, and harass our own citizens and lawful permanent residents, while on American soil, are part of China’s diverse campaign of theft and malign influence in our country and around the world,” Wray said.

The bureau director added, “The FBI will use all of its tools to investigate and defeat these outrageous actions by the Chinese government, which are an affront to America's ideals of freedom, human rights, and the rule of law.”

Wray: I’d like to close by saying that if you believe the Chinese government is targeting you—that you’re a potential Fox Hunt victim—please reach out to your local FBI field office. https://t.co/ji5q58ecTK

“With today’s charges, we have turned the PRC’s Operation Fox Hunt on its head -- the hunters became the hunted, the pursuers the pursued,” Demers said.

“The five defendants the FBI arrested this morning on these charges of illegally doing the bidding of the Chinese government here in the United States now face the prospect of prison.

"For those charged in China and others engaged in this type of conduct, our message is clear: stay out. This behavior is not welcome here,” Demers warned.

“With today’s charges, we have turned the PRC’s Operation Fox Hunt on its head — the hunters became the hunted, the pursuers the pursued.” — AAG John C. Demers. pic.twitter.com/OJaWXHJldZ

The DOJ recounted how one alleged stalking victim, a New Jersey resident, was pressured to return to China.

“In September 2018, Zheng Congying and another unidentified co-conspirator allegedly affixed a threatening note to the door of the John Doe-1’s residence stating, ‘If you are willing to go back to mainland and spend 10 years in prison, your wife and children will be all right. That’s the end of this matter!’” the news release said.

The following winter and spring, other suspected Chinese operatives “caused unsolicited packages to be sent to John Doe-1’s residence,” per the news release.

"These packages contained letters and a video with messages intended to coerce John Doe-1’s return to the PRC by threatening harm to family members still residing in the PRC."

The alleged coercion began in 2016.

Keith Byrne, the FBI's special agent in charge of the bureau's New York Field Office of the Diplomatic Security Service, praised the effort to arrest those suspected of intimidation and stalking inside the U.S.

“The worldwide presence and investigative capabilities of the Diplomatic Security Service enables us to work with our law enforcement partners domestically and around the world to bring criminals to justice,” Byrne said.

Eight individuals have been indicted on charges of conspiring to act as agents of the the Chinese government.

Six of the accused also face charges of conspiracy to commit interstate and international stalking.

Each charge can carry a maximum penalty of up to five years in prison. 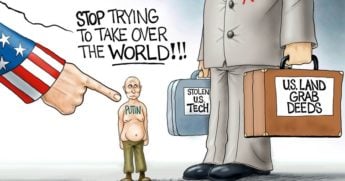 Who's the real menace? 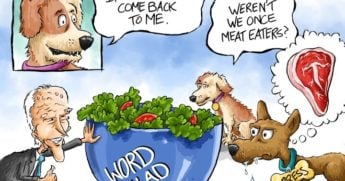 Is the press finally waking up?