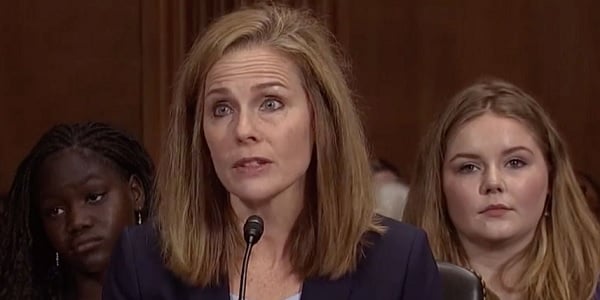 You might not think that Amy Coney Barrett, who grew up in Louisiana and spent much of her adult life in Indiana, would have much in common with me, a Montana native and combat veteran. But Judge Barrett has never let differences in background and experiences stop her from caring, listening, and helping those she encounters, including (it turns out) me.

After leaving the Army, I spent my first year of law school at the University of Notre Dame, where I had the good fortune of studying constitutional law under then-Professor Barrett. There I was, a West Point graduate, older than most of my fellow law students, one of the only students with multiple young children, and almost certainly the only one who, just a few months prior, had been leading meetings with village elders in Afghanistan as an Army officer and platoon leader. To top it off, I was also working through painful physical therapy to recover from injuries I received during my time in service.

To say I felt like a "fish out of water" would have been a massive understatement. But luckily, within the first few weeks, I attended Professor Barrett's "office hours" — a time set aside for students to connect with and ask questions of their professors in a one-on-one setting.

Professor Barrett's welcoming smile and thoughtful questions made it evident that she genuinely cared about her students. During our meeting, she asked about my wife, my children, and my experiences growing up in Montana. I already knew that her brilliance was renowned in both the Notre Dame community and beyond. What I didn’t know — but immediately discovered — is how much she truly loves teaching and getting to know the people around her. Law students are supposed to be terrified of their professors, or that’s what we all learned from the iconic law school film, “The Paper Chase.” But here, outside the office of one of the most esteemed constitutional scholars in her generation, I felt welcome and (somewhat) comfortable at law school for the first time.

My experience is hardly unique. Over the course of the year, I observed many of my fellow students experience the same kind of meaningful relationship with Professor Barrett. Thankfully for us, she had plenty of generosity to go around. I can specifically remember approaching Professor Barrett when pain from my injuries was beginning to interfere with my studies. She encouraged me and helped me. It might seem a small act to some, but for me it was a significant moment that I will never forget.

For the past six years, I have stayed in contact with Judge Barrett. Recently, my wife and I felt called to adopt a child into our home. Knowing that Judge Barrett has adopted two orphans, we reached out to her for advice. Despite the massive demands on her time, she overwhelmed us with the quantity and quality of information, guidance, and direction she was able and willing to provide. We felt so loved and supported by her constant, selfless giving of time and attention.

What is most impressive is that I am only one of the many students who look to Judge Barrett as a mentor. She was once asked in an interview what she most wanted to be remembered for in life. Her response was for people to say that "she loved well." Congratulations, Judge Barrett. Everyone around you — students, lawyers, and professors alike — will jump out of their seats to tell you the same thing: you’ve loved them well.