The former CEO of Twitter, Dick Costolo, a multimillionaire, says those who disagree with him politically shouldn't be around.

As in, they should be shot. 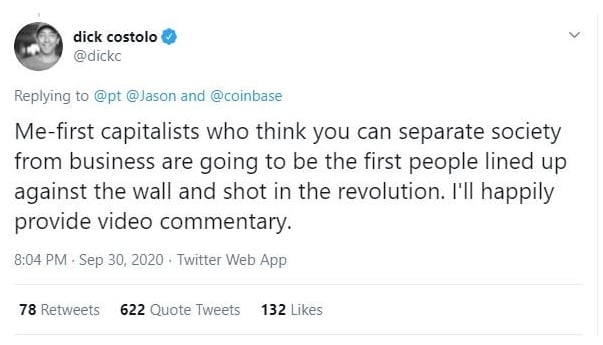 Should social media giants make threats against those who differ pollitically?
4% (12 Votes)
96% (316 Votes)

The Twitter news aggregator Twitchy said, "This editor has friends who have been suspended for questioning Google's search terms, but oddly enough Dick's tweet about killing people hasn't landed him in any sort of suspension or lock.

"When fascists like Dick show you who they really are, believe them," Twitchy said.

A Twitter user asked: "Um… Hey Mr. Wealthy Capitalist Former Corporate CEO? What make you think the revolutionaries would put you on camera duty instead of in the line against the wall?"

Another wrote, "Immoral and violent left-wing 1%ers might be the most dangerous, immoral, people you'll ever meet."