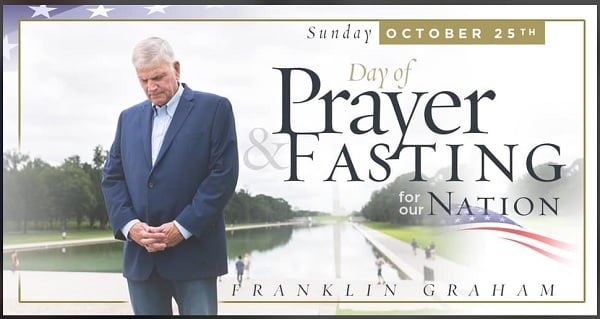 Franklin Graham, the CEO of the relief group Samaritan's Purse and of the Billy Graham Evangelistic Association, is calling for a day of prayer and fasting for Sunday.

He recently held the "Washington Prayer March 2020" on the National Mall in Washington, which coincided with the "The Return — National and Global Day of Prayer and Repentance," led by Jonathan Cahn, the Messianic rabbi known for his New York Times bestsellers, including "The Harbinger."

But more is needed, Graham wrote Friday on Facebook

"Our nation is at a critical juncture," Graham said. "We need to call out to God for His help, His intervention, and His mercy. It is only by His hand that America will survive and be able to thrive again. We have an election coming up with so much at stake—two vastly different directions for the future of this country. This not only affects us, but our children and our grandchildren."

Graham noted that when the survival of Israel under King Jehoshaphat was at stake, the king "called for a fast."

"The people sought the Lord and His help—and He delivered them," he said.

He cited Chronicles 20:3-4: "And Jehoshaphat feared, and set himself to seek the Lord, and proclaimed a fast throughout all Judah. So Judah gathered together to ask help from the Lord; and from all the cities of Judah they came to seek the Lord."

Graham said that with Election Day coming Nov. 3, he is "urging followers of Jesus Christ to fast and to pray for our nation Sunday, October 25. Mark it on your calendars and prepare now. I hope individuals, families, and churches will join me in asking for the Lord’s help and for His will to be done in this critical election. Will you?"

Before his National Mall event, Graham said America is facing trouble, and the "only hope for America is God."

"The mainstream media is so biased and will do whatever they can to attack or try to defeat President Donald J. Trump," he said. "There is never a positive story on the evening news about him, no matter how much good he does. He has done more for our country in four years than any president in my lifetime, but that doesn’t matter to agenda-driven media.

"What has happened to our country and journalism? I pray for President Trump and other leaders who support life, religious freedom, and what we know as biblical values that are important to us. In the coming election, most importantly, I pray for God’s will to be done. Every follower of Jesus Christ needs to pray and to vote."

Graham routinely uses his following of millions on social media to seek prayer for the nation and its leaders.

He said this week the nation "has always needed Christians to participate in electing our leaders."

"It makes us better. Being informed on which leaders promote life, family, free speech, free thought, religious freedom, livelihoods, safe and orderly communities, national security, educational choice, decency and morality, helps all citizens to flourish. But one thing to never forget is that an administration is not just a president, there are thousands appointed by the president in the executive and judicial branches that touch our lives each and every day.

"Gifted and dedicated people are selected as Vice President, Secretary of State, HUD Secretary, HHS Secretary, Defense Secretary, Education Secretary, Treasury Secretary, Labor Secretary, Commerce Secretary, Attorney General, ambassadors, deputy secretaries, assistant deputy secretaries, communications directors, spokespersons, including hundreds of federal judges. So as you look through the lens of God’s Word and vote, consider the vast reach of all the appointees and whether they reflect your values, beliefs and concerns. Unelected appointees impact our country and serve people around the world. Proverbs 15:22 says, 'Without counsel plans fail, but with many advisers they succeed.'"