“There is no truth in Pravda and no news in Izvestia.” That was the famous joke during the dark days of the Soviet Union regarding its two major newspapers – Pravda, which means “truth,” and Izvestia, which means “news.”

The sole purpose of those two giant propaganda mills cynically disguised as journalism organizations was to guard, protect, lie for and defend at all costs the elite ruling class in charge of the 20th century’s most destructive totalitarian regime.

Ironically, here in America – the nation that defeated the Soviet Union – almost all of today’s “mainstream media” serves the same purpose as Pravda and Izvestia once did: To protect, defend, and lie day in and day out to preserve this nation’s elite ruling class. That includes the wildly radicalized Democratic Party, as well as the permanent governing bureaucracy called the “deep state,” and even today’s violent neo-Marxist blitzkrieg dedicated to tearing down and transforming what they all condemn as an unjust, immoral and irredeemably racist country.

This total corruption of what was once a vibrant news establishment is powerfully and insightfully explored in the October issue of WND’s monthly Whistleblower magazine, titled “GUARDIANS OF THE SWAMP: How angry, entitled and shockingly dishonest ‘journalists’ are destroying America.” 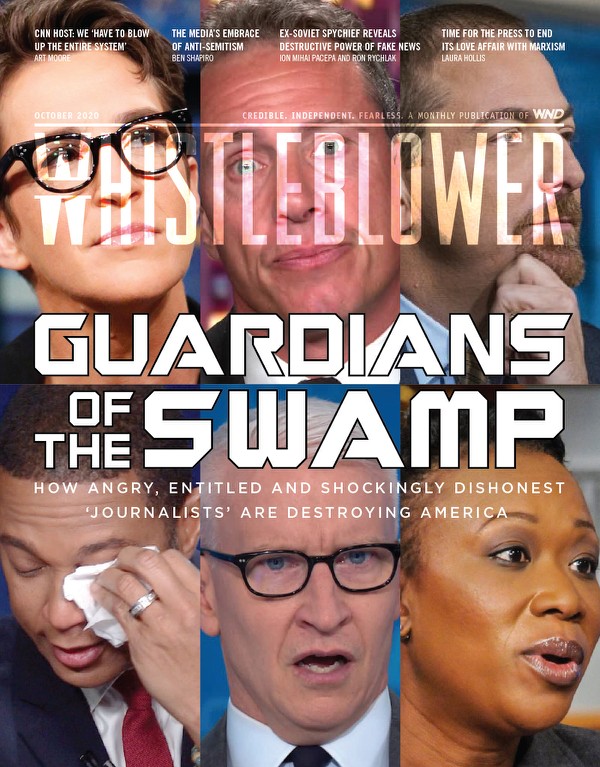 A few of the hottest battlegrounds in the establishment media’s war on traditional America:

* Millions of Americans wonder aloud how it’s even possible that someone like Joe Biden – who not only is obviously disintegrating mentally, is wrong on virtually every issue, and lies continually, but also, as reams of new evidence prove, is one of the most spectacularly corrupt politicians in memory – could become the Democratic Party’s presidential candidate.

* Likewise with regard to his vice-presidential candidate, Kamala Harris, who would likely become president sometime during Biden's first term, as he inevitably fades further and fails. In addition to being rated the most leftwing member of the U.S. Senate by the nonpartisan GovTrack.us, Harris has also proven to be one of the most thoroughly unlikable, abrasive, condescending, greedy, grasping, shallow and insincere candidates in a generation.

* As openly Marxist revolutionary groups like Black Lives Matter and Antifa have burned, vandalized and looted America’s cities daily for months, destroying businesses, assaulting and sometimes murdering people, today’s journalists have routinely dismissed it all as “mostly peaceful protests” against “systemic racism” and “police brutality” – while complaining loudly that America is actually under siege by “white supremacists.” Those who dare point out that it’s really hard to find many genuine “white supremacists” in today’s America, let alone rampaging hordes of them laying waste to the nation’s cities, are of course immediately condemned as white supremacists themselves.

* Since explosive proof finally emerged that Hillary Clinton was the person behind the Trump-Russia collusion hoax, the media have ignored the true story of the worst political scandal in American history: It was Clinton, not Trump, who actually colluded with Russia. It was she who bought Russia’s intelligence product (the fake “Trump dossier”) and then channeled the false, defamatory “intel” through cooperative American news organizations – precisely mirroring the modus operandi of Soviet disinformation campaigns of yesteryear. That is, carefully create a false narrative to advance a secret agenda, and then induce trusted Western media to broadcast the disinformation as “news.”

* Meanwhile, the promised Biden-Harris agenda – from virtual open borders and mass amnesty, to the confiscation of “assault weapons” (otherwise known as semiautomatic firearms), to eliminating America's fossil fuel industries, to socialized medicine, to fundamentally altering America’s constitutional system of government by “packing” the Supreme Court, eliminating the Senate filibuster, abolishing the Electoral College and much more – would rapidly lead to a totalitarian dictatorship in the United States of America.

Highlights of “GUARDIANS OF THE SWAMP” include:

Recently, Tucker Carlson summed up the future of the American news media with this prophetic statement: “When the smoke clears from this election, there’ll be a massive realignment in the media, no matter who wins. Because they showed who they are, and it’s so unappealing, it’s so far from journalism that it can’t continue.” 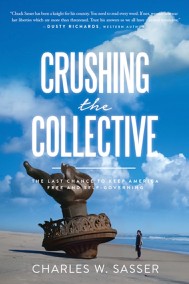 You’ll get a hardcover copy of Charles W. Sasser’s powerful book, “Crushing the Collective: The Last Chance to Keep America Free and Self-Governing.”

The American way – independence, entrepreneurialism, liberty – has been under assault for decades, now more than ever. Attacks on individuality, freedom and personal responsibility for most of the last century have resulted, as Alexis de Tocqueville once predicted, in a gradual degradation of the people and the descent into slavery of once-free people.

“Crushing the Collective” illuminates the very real dangers of the socialist mindset that is currently threatening Americans’ freedoms and the very existence of our great nation. As Benjamin Franklin said, “When the people find that they can vote themselves money that will herald the end of the republic.” Therefore, we must know the destructive history of nations drawn into the collectivist deceit, or we will be doomed to follow their same paths.

In “Crushing the Collective,” author Charles Sasser explores the various collectivization philosophies, processes and movements that have destroyed individual freedom in their drive toward the collective utopian state. In collectivist nations like Cuba, Russia, China, and North Korea the dependence came by tyrannical force. Even the path of “soft socialism” that progresses stealthily toward greater and greater government control is inevitably a slippery slope to ultimate destruction. During Rome’s final days people were so distracted by social decadence, hedonism, materialism, corruption and rejection of basic truths that they failed to notice their rights and liberties were being dismantled. No one remembered and stood up for their foundational values. Rome suffered from excess, which led to laziness, which led to tyranny. Americans today are buying into the same mindset.

And yet though America has been cut to the core, the liberty tree has not yet collapsed. “Crushing the Collective” is in the end a powerful wake-up call for free people of character, conviction and courage to stand up against the collective madness and together, restore America as the beacon of freedom it once was, and must be again.

If you prefer, you may order a single copy of the October 2020 issue, "GUARDIANS OF THE SWAMP." Or GET THE DIGITAL VERSION HERE!