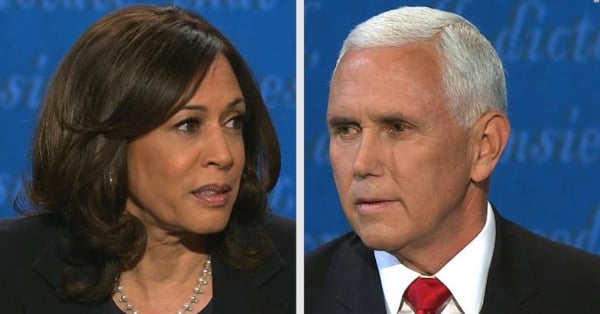 Among numerous false statements by Kamala Harris in the vice presidential debate Wednesday was the oft-repeated and easily refuted "Charlottesville lie" that Joe Biden says was the catalyst for his decision to run for president.

But there were many more, including the Democratic senator's claim that she and Biden don't want to ban fracking, that they won't raise taxes on the middle class, that the president said the coronavirus is a hoax, that Trump won't protect people with pre-existing conditions and that Abraham Lincoln's handling of a Supreme Court vacancy supports the Democrats' stance on Amy Coney Barrett.

The Trump-Pence campaign released a list of what it said were "24 false or misleading claims" made at the debate.

Harris claimed regarding the 2017 clash in Charlottesville over a Robert E. Lee monument that Trump called neo-Nazis and other white supremacists "fine people."

At Charlottesville, she said, "people were peacefully protesting the need for racial justice where a young woman was killed, and on the other side, there were neo-Nazis carrying tiki torches, shouting racial epithets, antisemitic slurs."

"And Donald Trump, when asked about it, said there were fine people on both sides," said Harris.

Pence directed his reply to media who have perpetuated the false claim as well as to Harris.

"You know, I think this is one of the things that makes people dislike the media so much in this country. That you selectively edit, just like Sen. Harris did, comments that President Trump and I and others on our side of the aisle make," the vice president said. "Sen. Harris conveniently omitted after the president made comments about people on either side of the debate over monuments, he condemned the KKK, neo-Nazis, and white supremacists, and has done so repeatedly."

In one of many occasions in which he repeated the lie, Biden said during his acceptance speech at the Democratic National Convention that Trump's words in 2017 were "a wake-up call for us as a country" and, for him, "a call to action."

'You're not entitled to your own facts'

On fracking, Pence pointed out that during the primary elections, both she and Biden said they would ban fracking.

Harris said during a townhall there's "no question I'm in favor of banning fracking ... and there has to be legislation." She it's "something I’ve taken on in California" and she has a "history of working on this issue."

Harris was fending off a question about whether she and Biden would pack the court when she switched to the dispute over Republicans moving to confirm Amy Coney Barrett on the eve of the election.

She said "Honest Abe" Lincoln, when he was running for re-election in 1864 and a Supreme Court vacancy arose, chose to wait until the election to send a nominee to the Senate.

But Lincoln waited until December 1864 only because the Senate had not been in session in October.

On taxes, Harris insisted Biden "has been very clear" that he "will not raise taxes on anybody who makes less than $400,000 a year."

Pence retorted: "Joe Biden said twice in the debate last week that he's going to repeal the Trump tax cuts. That was tax cuts that gave the average working family to a thousand dollars in a tax break every single year."

Biden, in fact, has said he would repeal the Trump tax cuts on his first day of office.

Trump, in fact, said it was the Democrats' "politicizing" of the pandemic, blaming it on him, that was "a hoax.'

Similar to his clarification regarding Charlottesville, Trump said that "hoax" is "referring to the action that they take to try and pin this on somebody, because we've done such a good job."

"The hoax is on them, not — I'm not talking about what's happening here. I’m talking what they’re doing. That’s the hoax."

Harris claimed Trump "is in court right now trying to get rid of the Affordable Care Act, which means that you will lose protections if you have pre-existing conditions."

The Trump campaign points out that this month Trump signed an executive order ensuring pre-existing conditions will be protected.

And he's made protecting "all pre-existing conditions" a key point in his second-term agenda.

"If Obamacare is struck down, President Trump has promised to pass and support a replacement that includes pre-existing condition protections," the campaign said.