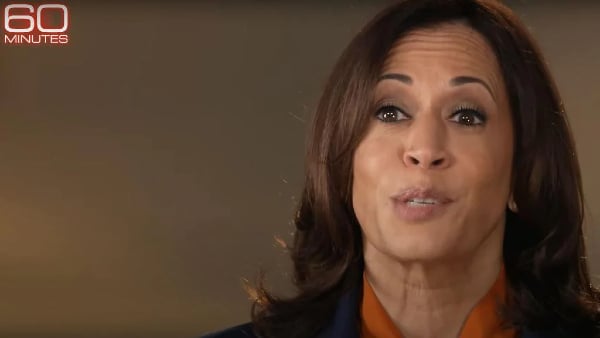 In her high-profile interview with "60 Minutes," Democratic vice presidential nominee trotted out four provably false lies to make her case that President Trump is a racist.

CBS News anchor Norah O'Donnell set her up with a loaded question Sunday night, asking if she views Trump's "attacks" on her as "racist."

"Well, this is not the first time in my life I've been called names and it – you know, it was predictable, sadly."

O'Donnell followed up: "Do you think the president is racist?"

"Yes, I do," she replied, laughing. "I do. You can look at a pattern that goes back to him questioning the identity of the first black president of the United States. You can look at Charlottesville, when there were peaceful protesters, And on the other side, Neo-Nazis and he talks about fine people on either side. Calling Mexicans rapists and criminals. His first order of business was to institute a Muslim ban. It all speaks for itself."

All four of Harris' claims, however, are false, noted Breitbart News editor Joel B. Pollak.

The issue of questioning Obama's eligibility to be president had nothing to do with race. Trump also questioned the eligibility of Republican Sen. Ted Cruz of Texas, who was born in Canada.

Regarding Charlottesville – which Joe Biden says was the reason he ran for president – Trump never said the neo-Nazis were "fine people." At the 2017 press conference, the president made it clear he was talking about the debate over a Robert E. Lee statute and explicitly declared the neo-Nazis should be "condemned totally."

When Trump referred to "Mexicans" at the launch of his first campaign in 2015, he was referring to rapists and criminals who enter the U.S. illegally and stated he was not talking about all illegal immigrants. "And some, I assume," he said of illegal immigrants, "are good people."

Trump never imposed a “Muslim ban." The president issued an executive order restricting travel from terror-prone countries identified during the Obama administration. It affected less than 10% of the world's Muslim population. Two non-Muslim countries were on the list, which was upheld by the Supreme Court.