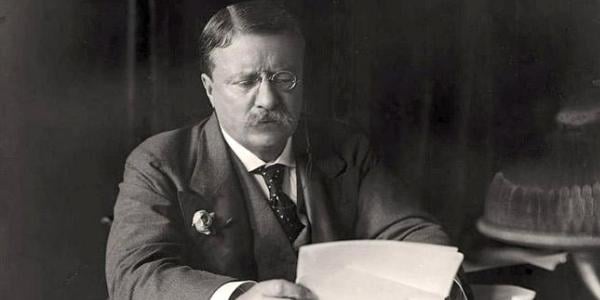 Much is unprecedented this year, and not only in politics. Every day seems to bring surprises, and one way or another America shall be changed by 2020.

The pundits and amateur historians have one thing wrong, however, about President Donald Trump’s hospitalization, and about the campaign’s interruption. This is “unprecedented,” we keep hearing. That’s not quite true, however. A similar situation, if not similar cause, occurred in 1912. Less than a month before the Election Day, Theodore Roosevelt was shot at point-blank range in Milwaukee as he was heading to the city’s main auditorium to deliver a major address.

A bartender from Brooklyn, Bavarian immigrant Joseph Schrank, had been following the Progressive (“Bull Moose” Party) campaign stops through the Midwest, before finally getting his clear chance in Milwaukee on October 14. Roosevelt had finished his dinner in the Hotel Gilpatrick when  Schrank pointed his Colt revolver at TR and fired one shot.

The bullet entered his chest and knocked him back. Roosevelt demanded that the would-be assassin be brought before him (as much to see the gun as the man – he noted that it was a .38-caliber pistol on a .44-caliber frame) and then countermanded his aides’ plan to drive him to a hospital.

“I will deliver this speech or die,” Roosevelt said. And he did, blood staining his shirtfront, for nearly 90 minutes. “It takes more than that to kill a bull moose!” he roared. Only then did he go to a local hospital.

Roosevelt was typically cool-headed through the experience. He was interested in the details about the almost-murder weapon partly so he could detail the experience to his pals. To one friend he noted irony of having escaped injury for years in the Dakota Badlands as rancher and cowboy, chasing thieves and rustlers; as a street-patrolling police commissioner in New York City; as a Rough Rider in Cuba, veteran of a couple bloody engagements, with fellow soldiers shot on either side of him.

“I felt like the old maid who discovered a burglar under her bed and yelled, ‘There you are! I’ve been looking for you for years!’”

After Roosevelt finished his speech that night and was examined, it was decided that he travel by train to Chicago, where specialists could examine him. Schrank’s bullet hit Roosevelt in the chest, glanced off a rib and stopped near the heart. A metal spectacle case and a triple-folded manuscript of his speech slowed the bullet. Further, a surgeon noted that it was Roosevelt’s massive chest muscles, where the bullet lodged (and remained there until he died) that saved his life.

“I have never seen such a physical specimen on my operating table,” he said.

A few editorialists mused about the candidate’s grandstanding, having survived the attack and absorbed the bullet. But the national consensus was admiration of Roosevelt’s devotion to his task. As his wife, Edith, took charge of the hospital room in Chicago, TR wrote, dictated, and largely directed his campaign from the hospital.

Many people today do not know that Roosevelt’s “day job” at the time was contributing editor of a Christian weekly magazine called The Outlook. After the shooting, the magazine ran on its cover a vivid design, enshrining Roosevelt’s prescient words from a March 1912 speech that foreshadowed Martin Luther King’s “I’ve Been to the Mountaintop” address.

TR’s words from “The Right of the People to Rule” speech:

The leader for the time being, whoever he may be, is but an instrument, to be used until broken and then to be cast aside; and if he is worth his salt he will care no more when he is broken than a soldier cares when he is sent where his life is forfeit in order that the victory may be won. In the long fight for righteousness the watchword for all of us is spend and be spent. It is of little matter whether any one man fails or succeeds; but the cause shall not fail, for it is the cause of mankind….

We, here in America, hold in our hands the hope of the world, the fate of the coming years; and shame and disgrace will be ours if in our eyes the light of high resolve is dimmed, if we trail in the dust the golden hopes of men.

Roosevelt’s opponents in that campaign, President William Howard Taft and New Jersey Gov. Woodrow Wilson, immediately announced that they would cease campaigning, or at least cease their attacks on Roosevelt. TR vehemently rejected that offer: “Anything that could with justice be said about me beforehand, can be said now,” he said.

His implication was a challenge to the fairness of opponents’ attacks, and the honesty of political partisans. Issues are issues, facts are facts, and the agenda of a presidential contest should have integrity.

So it is with former Vice President Joe Biden’s seemingly gracious gesture that he and Sen. Kamala Harris, and the rest of the Democratic Party, suspend negative advertising and personal criticism of President Trump for the time being.

By Theodore Roosevelt’s perspective, if advertisements are suspended because Trump has a virus, the ads were either unfair to begin with, or the Biden team lacks integrity behind its strategies.