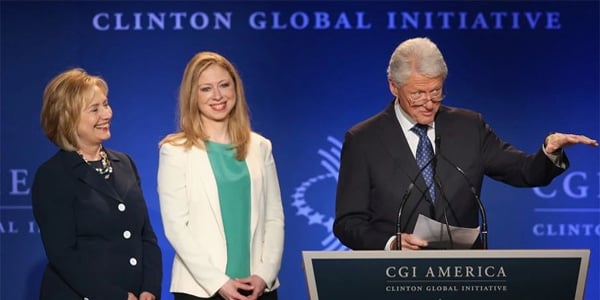 Hillary, Chelsea and Bill Clinton at a Clinton Foundation event

A federal tax judge has refused to shut down an investigation into the operations of the Clinton Foundation, ruling that the IRS, when it asked for summary judgment, "abused its discretion."

Just the News reported U.S. Tax Court Judge David Gustafson denied the IRS request and instead will allow the whistleblower complaint to proceed.

The complaint charges that the foundationshould lose its tax-exempt status.

The Clinton Foundation was flush with cash from huge donations, many from overseas, while Hillary Clinton was secretary of state. Its income has plunged in the years since she left office. In fact, investigative author Peter Schweizer said in a television interview with "Tucker Carlson Tonight" that donations to the foundation have "dried up."

"The Clinton Foundation has had a hard time raising money because they don’t have the influence to sell," he said. "They don’t have power access to sell and that, I think, is the primary evidence for what the Clinton enterprise was all about."

Doyle, a managing partner of DM Income Advisers, said the foundation and the World Health Organization formed an agreement that should have cost the foundation its tax-exempt status.

Doyle already has testified to Congress that the law doesn't allow the foundation to take part in certain types of agreements.

"According to promotional material, the Clinton HIV/AIDS Initiative partnered with the World Health Organization on a technical program to scale up 'national HIV/AIDS care and treatment,'" JTN reported.

The foundation, according to the whistleblowers, wrongly operated as a foreign lobbyist by accepting overseas donations and then trying to influence U.S. actions.

When Moynihan appeared before Congress, he said, the foundation should've registered under FARA, the Foreign Agents Registration Act."

"Ultimately, the foundation and its auditors conceded n formal submissions that it did operate as a (foreign) agent, therefore the foundation is not entitled to its 501c3 tax-exempt privileges as outlined in IRS 170(c)2," Moynihan said.

The IRS has denied the allegations in the complaint, although it has admitted to previous problems with compliance.

The judge, in deciding the case will continue, asked the IRS and whistleblowers for a schedule of actions.

The whistleblowers have asked for permission to take a deposition from a state official in Arkansas who oversees accounting compliance.

U.S. Attorney John Durham, as part of his review of the Barack Obama administration's use of U.S. intelligence agencies to spy on the 2016 Trump campaign, also has been asked to review the DOJ's investigation of the Clinton Foundation.

The New York Times reported Durham "has sought documents and interviews about how federal law enforcement officials handled an investigation around the same time into allegations of political corruption at the Clinton Foundation."

The report cited people familiar with the matter.

"Mr. Durham’s team members have suggested to others that they are comparing the two investigations as well as examining whether investigators in the Russia inquiry flouted laws or policies," the report said. "It was not clear whether Mr. Durham’s investigators were similarly looking for violations in the Clinton Foundation investigation, nor whether the comparison would be included or play a major role in the outcome of Mr. Durham’s inquiry."

Sixty-four House Republicans already have written to the IRS, FBI and Federal Trade Commission alleging that the foundation is "lawless" and needed to be investigation for "public corruption."

It is well known that many foreign interests made large donations to the foundation controlled by the Clintons when Hillary Clinton was secretary of state for Barack Obama.

The Times report said: "Critics have suggested that she was part of a quid pro quo in which the foundation received large donations in exchange for supporting the sale of Uranium One, a Canadian company with ties to mining stakes in the United States, to a Russian nuclear agency. The deal was approved by the Committee on Foreign Investment in the United States when Mrs. Clinton was secretary of state under President Barack Obama and had a voting seat on the panel."

Durham also is using a grand jury for his criminal investigation of the Obama administration's Trump-Russia probe.

Attorney General William Barr told a congressional committee the evidence shows the Obama administration spied on the Trump campaign. He also has called the Russia collusion claims "one of the greatest travesties in American history."