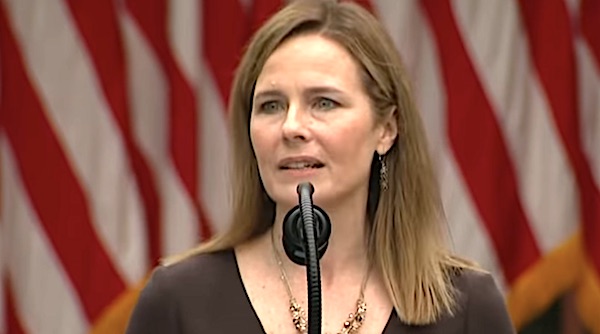 "That was their choice. It will be my choice to vote the nominee out of committee," Senate Judiciary Committee Chairman Lindsey Graham, R-S.C., said at the beginning of the meeting. "We are not going to allow them to take over the committee. They made a choice not to participate."

The rules of the committee require that at least two members of the minority party be present to transact business, but Graham waived the rule to report Barrett's nomination.

Graham justified the decision in an interview with "Fox & Friends" just before the meeting, saying Democrats are "boycotting the committee."

"So what I will do as chairman, there will be a majority of the committee present. We will waive that rule. We will report Judge Barrett out. She will go to the floor. And hopefully, by Monday or Tuesday, she will be on the court."

“We will not grant this process any further legitimacy by participating in a committee markup of this nomination just twelve days before the culmination of an election that is already underway," he said.

Republicans argue the president is elected for four years and has a duty until he leaves office to send a nomination to the Senate when a Supreme Court vacancy arises, as it did with the death of Ruth Bader Ginsburg. They point out that Ginsburg herself was on record affirming that duty.

"I think that will be another signature accomplishment in our effort to put on the courts, the federal courts, men and women who believe in the quaint notion that maybe the job of a judge is to actually follow the law," he said.

President Trump's nomination of Barrett was another fulfillment of his campaign promise to appoint "originalist" judges who interpret the Constitution as written, according to its original intent.

Democrats fear Barrett will be the deciding vote to overturn the Roe v. Wade decision that established a right to abortion in 1973.

When she was nominated in 2017 to the 6th Circuit Court of Appeals, Sen. Dianne Feinstein, D-Calif., infamously told her that her religious beliefs could disqualify her, declaring her "the dogma lives loudly within you."

Feinstein and other Democrats were widely criticized for trying to impose an unconstitutional faith test on Barrett. But Feinstein did it again during Barrett's Supreme Court confirmation, although not openly. She was caught on an open mic discussing the fact that the judge's opposition to abortion is based on her Roman Catholic faith.

Marjorie Dannenfelser, president of the national pro-life group Susan B. Anthony List, said the vote Thursday "is an historic milestone for the pro-life movement, especially pro-life women, as Amy Barrett advances one step closer toward a seat on the nation’s highest court."

"In last week’s hearings, Judge Barrett’s formidable intellect and principled constitutionalist philosophy shone throughout hours of questioning. In the face of pro-abortion Democrats’ fearmongering and their media allies’ attacks on her Catholic faith, she showed grace and dignity. There is no question Barrett is exceptionally qualified to serve on the Supreme Court," Dannenfelser said.