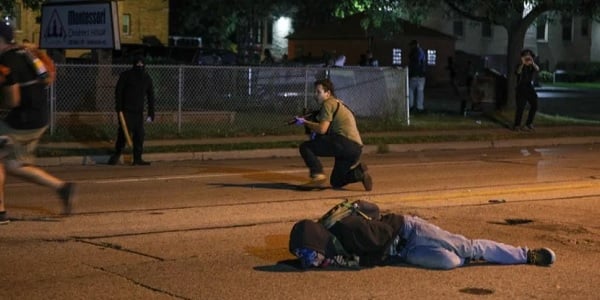 The man who fired the first shots from behind Illinois teen Kyle Rittenhouse during the fatal incident in Kenosha, Wisconsin, has been charged, according to the Gateway Pundit.

Joshua Ziminski, 35, was charged with disorderly conduct and use of a dangerous weapon for firing his weapon during the Aug. 25 incident.

Rittenhouse is accused of shooting and killing two men who approached him during a riot in response the shooting of Jacob Blake. The teen has claimed self-defense.

The Gateway Pundit reported the charging document states investigators obtained videos in which Ziminski "was holding a black handgun, which he was holding in his left hand, pointing downward. Detective Howard reports that in reviewing multiple other videos, he was able to see the defendant and Kelly Ziminski, in and around multiple other people on the streets, and the defendant was seen holding the handgun down at his side in said videos.

"In another video," investigators said, "the defendant and Kelly are seen walking near a fire in the area of the Ultimate Gas Station lot. In later video, the defendant's right arm is seen on the video, which is taken near 63trd Street and Sheridan Road, in the city and county of Kenosha, state of Wisconsin. Detective Howard reports the defendant's arm pointing the gun upward towards the sky."

The statement said there was a muzzle flash and a gunshot was heard.

"The defendant is seen walking in the same area, holding his right arm upwards, and firing off one shot from his handgun."

The Gateway Pundit reported the police said that when speaking to Ziminski and his wife, who was present at the time, both admitted that Ziminski had fired a "warning shot" into the air.

That strengthens the case that Rittenhouse had reason to fear for his life and was acting in self-defense.

Videos showed Rittenhouse tripped and fell to the ground then turned and fired four times at the men approaching him.

Rittenhouse, 17, is accused of first-degree intentional homicide. He's being held in a detention center in Illinois, where he lives. His lawyers have argued it would be dangerous to extradite him to Wisconsin because of the possibility of retaliation and the extreme political climate.

Shortly after the shooting, Democratic presidential nominee Joe Biden released a video accusing Rittenhouse of being a "white supremacist," which immediately drew a rebuke from Rittenhouse's lawyers.

The lawyers argue there is no public evidence that Rittenhouse is a white supremacist.

Attorney Lin Wood threatened the Biden campaign with legal action if the claim was not withdrawn.

Donors already have raised more than $500,000 to help with the teen's defense.

The fundraising website says Rittenhouse shot in self-defense, as he was being chased by rioters and had heard gunshot.

He's accused of shooting Jacob Rosenbaum, 36, after the man chased Rittenhouse and lunged at him near an auto-body shop.

Videos show Rittenhouse ran into a roadway, tripped and fell to the ground and allegedly fatally shot Anthony Huber, 26, after the man struck Rittenhouse with a skateboard and tried to pry away his firearm.