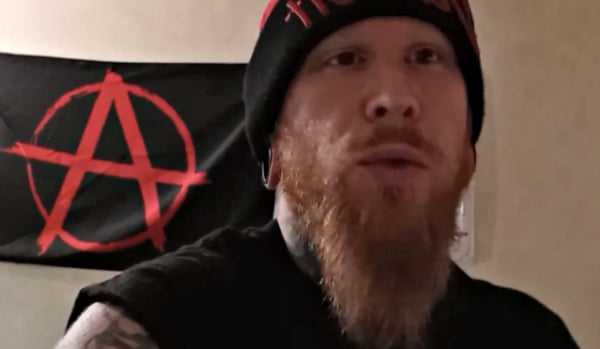 Michigan Gov. Gretchen Whitmer and other Democrats have been blaming the alleged plot against her on President Trump, but at least one of the six ringleaders arrested Thursday by the FBI is a self-proclaimed anarchist who has expressed disdain for Trump.

Caserta, in a YouTube video with an anarchist flag in the background, called Trump "a tyrant."

"Trump is not your friend dude," he said.

"Every single person that works for government is your enemy, dude."

The anarchists who have been responsible for much of the violence in the protests ignited by the death of George Floyd on Memorial Day have aligned themselves over the decades with the Marxist left. They are united in the aim of tearing down the American political system and free enterprise but differ in their vision for the society that would replace it.

Anarchists, who divide into various streams, generally seek a stateless society with no hierarchy based on voluntary associations.

Whitmer, in televised remarks Thursday, said she "knew this job would be hard, but I'll be honest, I never could've imagined anything like this," CNN reported.

She blamed Trump, mischaracterizing his remarks in the presidential debate last month in which he condemned white supremacists.

"Just last week, the president of the United States stood before the American people and refused to condemn white supremacists and hate groups like these two Michigan militia groups," she said. "'Stand back and stand by,' he told them. 'Stand back and stand by.' Hate groups heard the president's words not as a rebuke, but as a rallying cry, as a call to action. When our leaders speak, their words matter. They carry weight."

Trump, in a heated back-and-forth in which Joe Biden inserted himself, appeared to be attempting to employ the language of moderator Chris Wallace to call on such groups to "stand down." The context did not indicate he was telling the groups to "stand by" for an order to deploy.

"President Trump has continually condemned white supremacists and all forms of hate," McEnany said in a statement to CNN. "Governor Whitmer is sowing division by making these outlandish allegations. America stands united against hate and in support of our federal law enforcement who stopped this plot."

See Brandon Caserta call the Declaration of Independence an "anarchist document" and denounce the Constitution:

See Brandon Caserta insist police "are not here to protect you."