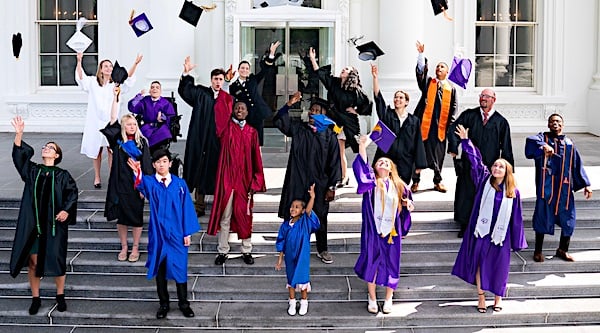 Graduates from across the nation celebrate the commencement ceremony honoring the Nations Graduating Class of 2020 Friday, May 22, 2020, on the steps of the North Portico of the White House. President Donald J. Trump, First Lady Melania Trump and Secretary of Education Betsy DeVos hosted the graduates at a commencement ceremony honoring the 2020 Graduating Class in the East Room of the White House. (Official White House photo by Tia Dufour)

A noted pollster is calling the results of his survey of university students an "indictment" of the radicalism that is being taught in institutions of higher learning.

More than half, 52%, claim they "share the same opinions and beliefs as all or most of their friends."

And 39% say "violence can be justified to prevent a person from using hate speech or making racially charged comments," up 8 points from just a year ago.

"Free speech, support for the Constitution and even having a variety of friends are taking a hit on America’s campuses where college undergraduates appear to be adopting a 'my way or the highway' attitude," Bedard wrote.

He said the nation’s future leaders "shows an antagonistic approach by students to views they don’t agree with."

"And worse, a majority feel they can’t express a view different from those of their professors."

The survey found 52% say the Constitution is important.

But 40% agree "it is sometimes appropriate to shout down or disrupt a speaker on campus."

Fifty-three percent "feel intimidated in sharing their views if they disagree with their professor."

"These findings are a real indictment of the radical teachings of the American higher educational system and a total lack of understanding of the U.S. Constitution by students," McLaughlin said. "Think about it. More than one-third of students call the 8th wonder of the world an outdated document and bare majority, 52%, call it an important document."