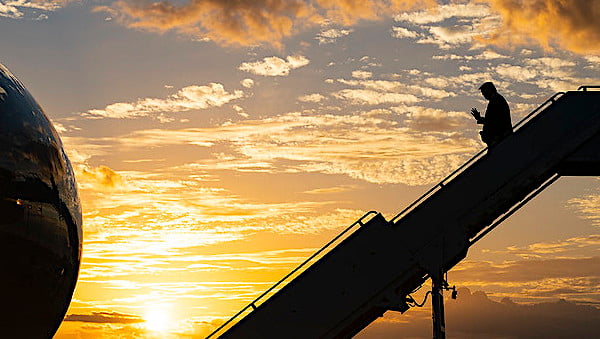 Americans are in the midst of what is undoubtedly the most consequential election since the Civil War.

It’s hard to imagine a greater contrast between the two choices. As evangelist Franklin Graham puts it, these “two vastly different directions for the future of this country” will affect not just today’s Americans, “but our children and our grandchildren” as well.

Ironically, though one of these possible “futures” is clearly pro-life and pro-freedom, and the other is clearly anti-life and anti-freedom, large numbers of professing Christians intend either to vote for Joe Biden and Kamala Harris, or even more inexplicably, not to vote at all.

Last week, popular evangelical pastor John Piper made his case for Christians not voting for either Donald Trump or Joe Biden.

Piper makes clear from the get-go that Biden’s far-left policies are abhorrent to Christians, acknowledging that they’re geared toward what Piper describes as “baby-killing, sex-switching, freedom-limiting and socialistic overreach.”

But what about Trump, whose policies for the past four years have proven to be overwhelmingly consistent with, and supportive of, evangelical Christian sensibilities and concerns? Donald Trump is, in fact, widely regarded as the most pro-life president of our lifetime. Likewise, as president he has been the best friend of Israel in a generation, courageously recognizing Jerusalem as the capital of Israel and moving the U.S. Embassy there – something many previous presidents of both parties promised but failed to do. And Trump has consistently championed religious freedom and freedom of speech, both under brutal attack by the radical left, which – truth be told – is essentially hostile to Christianity.

So what’s the problem? Piper is concerned that Trump’s personal failings, specifically four things – his “unrepentant boastfulness,” his “vulgarity,” his “factiousness” and his past “sexual immorality” – are also, like abortion and socialism, “deadly,” even potentially “nation-corrupting.” Therefore, he said, he will not vote for either candidate.

Putting aside Piper’s odd moral equivalence between rampant abortion and boastfulness, does the good pastor not realize that when you vote for a president, you are not choosing only one leader and his policy agenda, but a multitude of leaders and policies in every area of life, and therefore a whole “future” for the country, as Franklin Graham put it? Most prominently, you are choosing a vice president who may well become president (as has happened 14 times in U.S. history). You are also choosing Cabinet and department heads. And you are choosing federal judges, including Supreme Court justices with lifetime tenure who will decide issues of stupendous importance that affect every American. And you are choosing thousands of other people – about 4,000 federal government appointees in all – who will profoundly shape the nation in which your children and grandchildren will live for a long, long time – whether for good or for ill.

Contrast Vice President Mike Pence with his vice-presidential rival Kamala Harris. Pence has proven, on the field of battle for the last four years, that he is indeed a true Christian in word, deed and manner – exactly the kind of Christian, with a spotless personal life, that one would suppose John Piper could support. However, Kamala Harris is precisely the opposite sort of person. Aside from being gratingly unlikable, condescending and shockingly dishonest, the far-left Harris has a long history – first as California’s attorney general and later as a U.S. senator – of open religious bigotry.

Since both Trump and Biden are in their 70s and could easily turn the presidency over to their vice presidents, what then? Would John Piper prefer Mike Pence to Kamala Harris?

If so, there is an opportunity for him to make that choice known at the ballot box on Nov. 3. And even more important, since he is an evangelical Christian figure with considerable influence, to make it known to his many listeners. Pastor, if you don’t want to see the viscerally anti-Christian Harris, whose policies are so extreme that the nonpartisan GovTrack.us found her to be the most leftwing member of the U.S. Senate – even more radical than socialist Bernie Sanders – then your other option is to vote for Donald Trump, even if he’s boastful and egotistical. Because Biden, who is obviously frail and rapidly failing both mentally and physically, would very likely turn the country over to Kamala Harris sometime during his first and only term as president.

Although many evangelical leaders openly support Trump and Pence, like mega-pastor John MacArthur who says, “Any real, true believer” will vote for Trump over Biden, John Piper is not alone, as there are other prominent Christians who refuse to support Trump because of his perceived character flaws.

But it actually gets worse than that.

Last week, a new coalition calling itself Pro-Life Evangelicals for Biden urged pro-life Christians across America to support the most radically pro-abortion presidential and vice presidential candidates and party platform in American history.

You see, argues the group, whose online petition has garnered thousands of signatures, "poverty kills millions every year. So does lack of healthcare and smoking. Racism kills. Unless we quickly make major changes, devastating climate change will kill tens of millions. Poverty, lack of accessible health care services, smoking, racism and climate change are all pro-life issues."

This largely liberal-left coalition – which includes Christianity Today’s former board chairman John Huffman and Billy Graham’s granddaughter Jerushah Dufore – claims "the most common reason women give for abortion is the financial difficulty of another child." Thus, they praise “a number of Democratic proposals that would significantly alleviate that financial burden: accessible health services for all citizens, affordable childcare, a minimum wage that lifts workers out of poverty" and so on.

According to this group’s thinking, even though Biden and Harris openly support de facto infanticide for any reason or no reason, the Democratic candidates’ “policies are more consistent with the biblically shaped ethic of life than those of Donald Trump."

How can any Christian think this way?

Friends, because of the urgency of the hour, let’s just dispense with comforting euphemisms and other reality-avoidance. Abortion – which Biden, Harris and the 2020 Democratic Party Platform unreservedly endorse in all circumstances and demand that you and I as taxpayers pay for – amounts to executing babies right up to the actual moment of birth and sometimes beyond. That’s the dictionary definition of “infanticide.”

As pro-life group Live Action’s founder Lila Rose has publicized, the testimony of many abortion-clinic workers as well as abortionists themselves reveals the fate of thousands of late-term abortions, including viable human babies “mistakenly” born alive after attempted abortions. Methods of execution at that point – again, we are talking about living, breathing, already born, viable babies – range from “putting a baby who survives an abortion into a jar with toxic solution to drown,” said Rose, to cutting off oxygen and effectively strangling the child, and even to gruesome methods such has twisting off their heads. One abortionist boasted to Live Action investigators of having performed “‘20-some thousand’ abortions after 24 weeks, and nonchalantly detailed his chilling procedure for administering a fatal injection to the baby in the womb (to make the child ‘mushy’ and easier to remove) and extracting body parts in pieces.”

That – every bit of it – is what “Pro-Life Evangelicals for Biden” are actually supporting and facilitating, whether they realize it or not, and whether they like it or not.

That is also what Christian voters who refuse to vote for either candidate “out of principle” are supporting, whether they realize it or not, and whether they like it or not.

It’s simple math: The only vote that effectively opposes and works against America’s great national sin – the abomination of violently snuffing the life out of the next generation at the rate of about 1 million per year – is to support the reelection of Donald Trump and Mike Pence.

Trump is not a perfect person. Neither am I and neither are you. Get over it.

Friends, we are blessed to be citizens of the greatest nation on earth. Our forefathers came here at tremendous risk to life and limb to establish a free Christian nation and many died in the process. I’m not asking you to risk your life – just to vote. And you need to vote for the presidential and vice presidential candidates who will champion life and not death; freedom and not socialist totalitarianism; traditional values and not progressive-left “there-are-100-different-genders” sexual anarchy; freedom of speech and religion, not censorship and “cancel culture”; Rev. Martin Luther King’s vision of a color-blind society and not Black Lives Matter’s vision of revenge, destruction and revolution.

Life is full of tough decisions. Voting in 2020 is not one of them.

“When the righteous are in authority, the people rejoice: but when the wicked beareth rule, the people mourn.” – Proverbs 29:2

“Should you help the wicked and love those who hate the LORD? Therefore the wrath of the LORD is upon you.” – 2 Chronicles 19:2

“I call heaven and earth to record this day against you, that I have set before you life and death, blessing and cursing: therefore choose life, that both thou and thy seed may live.” – Deuteronomy 30:19