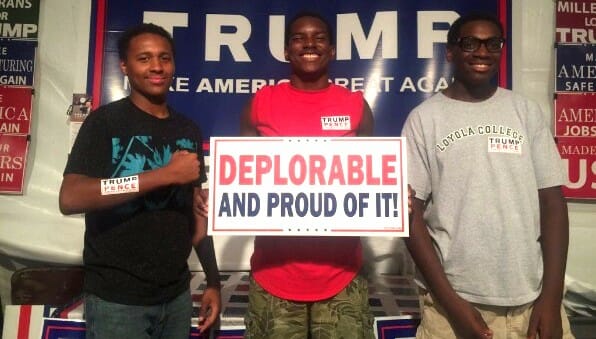 President Trump received only 8% of the vote among blacks in 2016, but a poll Thursday found 31% of likely black voters say they would vote for him if the election were held today.

The daily poll by Rasmussen – which was the closest among major polling companies in predicting the 2016 election – showed a steady increase of black voters choosing Trump, from 27% to 31% since Monday.

Rasmussen's White House Watch poll on Thursday indicated Democratic presidential nominee Joe Biden had a 1 point lead over Trump among likely voters. The poll's margin of error was 2.5%. In 2016, Hillary Clinton had a 0.9% edge in the national vote tally, while Trump won 304-227 in the count that mattered, the Electoral College.

Political analysts have said that if Trump were to double his vote among blacks from 2016, it could tip the election in his favor.

Meawhile, WND reported Thursday the vice president of the Flint City Council, a lifelong Democrat who voted for Hillary Clinton, declared at a campaign rally led by Vice President Mike Pence that he will vote for Trump this time.

"This is not a game, folks. President Trump, Vice President Pence — God uses whoever he wants to bring his people out of whatever the problem happens to be," he told the crowd.

This week, the Democratic Party data and analytics company Catalist found black voters have expanded their share of ballots cast in this election compared to the last election in key battleground states such as Florida and Michigan, the Washington Examiner reported.

President Trump has touted accomplishments that have benefited blacks, including record-low unemployment prior to the coronavirus pandemic, opportunity zones, criminal justice reform and permanent funding of historic black colleges.

Sport columnist Jason Whitlock, who recently interviewed Trump for Outkick.com, told "The Glenn Beck Radio Program" on Tuesday the president's record "speaks for itself" and the "façade" that he is a racist "just doesn't ring true."

He notes many black Americans, including celebrities such as Kanye West and Ice Cube, are breaking rank.

Whitlock said Trump "actually has a record to stand on, unlike even Barack Obama."

"When [Obama] was president, I don't think he had much of a record to stand on, in terms of, 'Hey, what did he actually deliver for African Americans?'" he said.

"President Trump has things he can stand on and, you know, beyond that I think black people understand when he starts talking about black unemployment rate," said Whitlock. "And America's unemployment rate. And then, when you add in for black men, the façade we've been putting on [President Trump] … you know, this whole thing that he's some flaming racist, it just doesn't ring true."