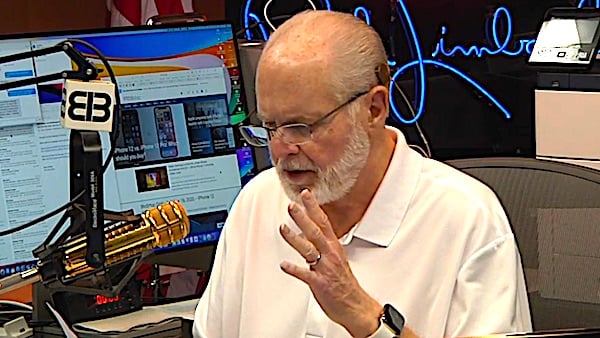 PALM BEACH, Florida -- Radio legend Rush Limbaugh updated Americans on the status of his stage 4 lung cancer on Monday, indicating his latest scans for the deadly disease are not encouraging.

"The scans did show some progressions of cancer," Limbaugh said on his national broadcast. "Prior to that the scans had shown that we had rendered the cancers dormant ... we had stopped the growth."

"We have some recent progression, it is not dramatic but it is the wrong direction."

Limbaugh says he's now having to tweak his treatment program.

"The idea now is to keep it where it is or maybe reduce it," he explained.

Although the latest news is not showing improvement in his health, Limbaugh put the situation in perspective when looking back on his first treatment attempts when he was initially diagnosed this past winter.

"It was hopeless, it was absolutely hopeless. Yet a treatment regimen was begun and the first two of them failed, I mean big-time failed. ... The third one? Magic! It worked. That's where we were able, over the course of months, to render the cancer dormant."

"After receiving the diagnosis , I never thought I would see October 1st," Limbaugh continued. "The doctor said if you don't do anything, we're looking at a couple of months ... There is no way back in January and February that I had anything but hope that I would still be alive on this day, October 19th, and that I would be fully productive working."

Limbaugh says he still gets "fatigued" and "very tired," but he's extremely grateful to come to the radio studios each weekday.

"I wake up every day, thank God that I did. I go to bed every night praying to God that I'm gonna wake up," he said. "It's a blessing when you wake up. It's a stop-everything-and-thank-God moment. ... It's a blessing to maintain as much normalcy as you can."

The top-rated host reiterated hispersonal relationship with Jesus Christ, "and that's why I'm able to remain fully committed to the idea that what is supposed to happen will happen when it's meant to. ... It's helpful to be able to trust and believe in a higher plan."

While Limbaugh noted that we only have one life to live here in our physical flesh, "We get a do-over every day."

"The fact that I have that option and opportunity ... go get the Hallelujah chorus and have them start singing to me."

Regarding the future, Limbaugh says he's "far more optimistic than pessimistic, attitudinally, to me, because of the support systems I have, the people that are helping me, family."

He again brought up his favorite baseball analogy regarding the state of his health, saying he was "stuck on second base, fully committed to stealing third and rounding towards home. ... That's the objective, that's the goal."

Fellow radio host Michael Savage responded to Limbaugh's update saying: "Limbaugh's crying about his cancer on air! Worst 15 minutes in radio history! Spilled a large coffee all over counter and floor. I PROMISE MY AUDIENCE THIS- I WILL NOT DRAG YOU DOWN WITH ME! Best wishes RUSH, but stop and leave the stage with dignity."

Limbaugh's crying about his cancer on air! Worst 15 minutes in radio history! Spilled a large coffee all over counter and floor. I PROMISE MY AUDIENCE THIS- I WILL NOT DRAG YOU DOWN WITH ME! Best wishes RUSH, but stop and leave the stage with dignity.

Savage then added: "Compare this to Lou Gehrig in Yankee Stadium."