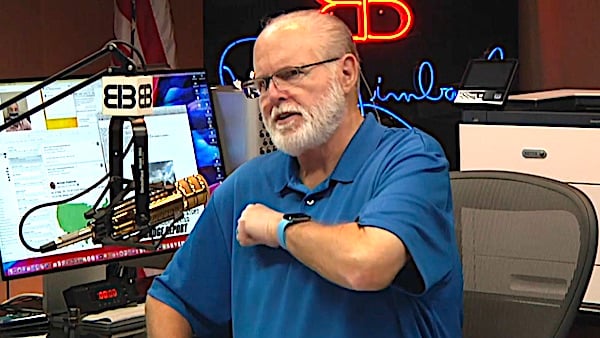 Talk-radio host Rush Limbaugh says a new NBC/Wall Street Journal poll indicating Joe Biden is up by 14 points over President Trump is likely no more accurate than a poll at this time four years ago that had Hillary Clinton up 11 points over Trump.

He believes the problem is that more Democrats are sampled than Republicans.

The new poll had a sample of 45% Democrats and 36% Republicans.

"On what planet will turnout on Election Day have a nine-point advantage for Democrats? Democrats are admitting that they are losing the enthusiasm gap to Trump," Limbaugh said.

"Plugs is up by 14 in the 2020 version of this poll. The sample in 2016 was plus seven Democrat. It’s plus nine Democrat in 2020. So they may just be reusing the results in 2016 and saving the money. The headline from 2016, the NBC News/Wall Street Journal poll: 'Trump Doubles Down That Election is Rigged, as latest NBC News/Wall Street Journal Poll Shows Support Falling,'" he said.

In 2016, he said, commentators claimed Trump's support "was falling off the edge of the earth."

This week, commenting on the new poll, NBC's Chuck Todd stated it was "by far Joe Biden's biggest lead in our poll so far," and the Wall Street Journal's John Bussey called it "a pretty wide margin."

ABC's George Stephanopoulos wondered, "How can you come back from that kind of a deficit?"

Limbaugh commented: "How can you come back from that kind of deficit? Well, what if the deficit doesn’t exist?"

He said a 45-36 advantage for Democrats over Republicans in the sampling is "crazy."

The punditry had the same reaction in 2016, he pointed out.

Back then, ABC News analyst Matthew Dowd said no one ever had been that far behind and still won, and CNN White House correspondent Jeff Zeleny called it an unprecedented implosion.

Limbaugh said history simply is repeating itself, and he reminded his listeners what he said at the same point in 2016.

He said at the time: "Spine of steel, do not cave, do not waver, do not bend to the all-out assault here that is the daily soap opera narrative. We are being pummeled with it. It’s important that you not believe. Even this Wall Street Journal/NBC poll that shows Hillary up 11. You know, it’s normally a three-day poll. They reported it with only two days average to get max impact post-release of the Trump audio."

But poll then, and he believes now, was inaccurate.

"It is classic disinformation, classic misinformation. And we find out the people who did this particular poll are working for the Clinton campaign. One name is Geoff Garin, what’s the other guy, Peter Hart, whatever, the people that did this particular poll, NBC News/Wall Street Journal showing Hillary up 11, have direct ties to the Clinton campaign. There is no separation. There is no boundary. There is no media. Everything is the left and the Democrat Party."

There also have been indications that Republicans are far more reluctant to answer questions from pollsters than Democrats, and many are fearful in general of expressing support for Trump.