When Republicans conceded that Russia meddled in the 2016 election, it gave the likes of former CIA Director John Brennan, former Director of National Intelligence James Clapper and former FBI Director James Comey an alibi for their otherwise unfounded investigation of the Trump campaign.

Thomas J. Farnan, an attorney in Pittsburgh, makes the case in an a piece published by the National Pulse that is excerpted from his short ebook, "The Russia Lie: How the Military Industrial Complex Targeted Trump".

He argues that the Obama administration officials interviewed in the criminal probe led by U.S Attorney John Durham could simply have argued that they were doing all they could do prevent Russia from interfering in our election.

Farnan noted that Brennan "recently shrugged off the smoking-gun disclosure that Hillary Clinton schemed to blame Trump and Russia for her embarrassing email problems because, he suggested, her campaign was entitled to highlight Russian interference."

Brennan probably told Durham, he said, that President Obama became concerned about Russian interference back in 2015 "and instructed the CIA to use all intelligence tools at its disposal to get to the bottom of it."

"Guaranteed, that made Durham tug at his beard and ask, 'How do you indict high ranking officials for protecting America?'"

Farnan argued that there is no solid evidence for the key claim that Russia hacked the Democratic National Committee servers and gave damaging emails damaging to Hillary Clinton's campaign to Wikileaks to publish.

Further, the only Russians special counsel Robert Mueller indicted were associated with an internet troll farm, the Internet Research Agency, that purchased $100,000 worth of Facebook ads. More than half were purchased after the election, and only a small percentage had anything to do with the candidates. And, significantly, the Mueller prosecutors were scolded by a judge because they couldn't prove their claim that the company had ties to the Kremlin.

"The stranger-than-fiction truth is that the DNC and the Clinton campaign joined with the CIA, the FBI, think tanks, private contractors, and foreign intelligence services, to raise a false Russian flag over the Trump campaign," Farnan wrote. 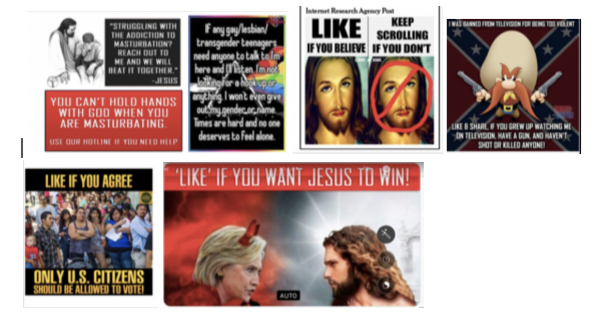 In addition, Farnan pointed out, the "useless Republican-controlled Senate Intelligence Committee commissioned two reports, from the University of Oxford's Computational Propaganda Research Project and the firm New Knowledge, that also concluded that the IRA had influenced the election by social media posts."

Farnan noted the actual social media posts uncovered by the Senate and the special counsel "were beyond strange."

"You've probably never seen these because the media does not want you to know how stupid the idea of Russian interference really is," he wrote.

The Justice Department "was forced to slink away in shame and dismiss the indictment" against the Russians associated with the troll farm.

"After tens of millions of dollars in investigations, and countless words spilled in the media alluding to a Russian conspiracy to steal the election, there was nothing there," Farnan wrote.

"Forget collusion, there is no real evidence of Russian interference, either."

He said the Republican establishment's "slavish acceptance of the blame-Russia mantra perfectly illustrates why it regularly loses political battles."

"This scandal is huge, much bigger than Watergate, and compromising in its resolution is destructive," he said.

Farnan poined out that at a press conference on April 18, 2019, releasing Mueller's report, Attorney General Bill Barr praised the special counsel for uncovering Russian interference, insisting that that part of the investigation was justified.

"Therein lies the basic design flaw of Durham's probe: Nobody has gone to jail because Republicans stupidly conceded phony Russian intrigue and the plotters have said they were justified to investigate it," Farnan wrote.

"This insidious false flag operation continues to do political damage to President Trump because those in power have been duped by The Russia Lie."