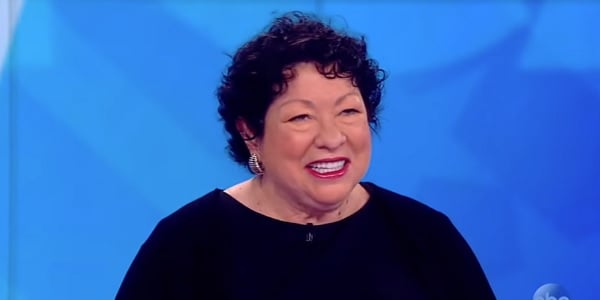 Judge Amy Coney Barrett gave repeated assurances during her 2017 confirmation to the Seventh Circuit Court that she "would never impose my own personal convictions upon the law."

And yet now that she has been nominated to the Supreme Court, critics on the left argue her abortion views should somehow disqualify her from the post.

Three high court nominees before her – Ruth Bader Ginsburg, Sonia Sotomayor and Elena Kagan -- took very public stances on abortion before their nominations and confirmations. That it has become an issue only this year, and only for Barrett, has only one explanation: the left’s obvious double standard.

This week, attacks on Barrett again spread like wildfire. On October 1, abortion advocate Brian Fallon tweeted about a 2006 advertisement in the South Bend Tribune. It was a letter outlining the consequences of Roe v. Wade and called for “put[ting] an end to the barbaric legacy” of the abortion decision, with Barrett one of many signatories. Fallon is the executive director of Demand Justice, an organization that has plastered its opposition to Barrett all over its homepage, Twitter, and with a seven-figure ad buy.

In 2013, Notre Dame Magazine  reported that Barrett gave a presentation on campus that “spoke both to her own conviction that life begins at conception” as well as the “high price of pregnancy and burdens of parenthood that especially confront women” before asking if the abortion debate would be better resolved at the ballot box -- a concept that Students for Life’s Institute for Pro-Life Advancement polling has found the majority of millennials desire.

The issue of Roe comes up with every Supreme Court vacancy, as court watchers speculate whether a future justice will see Roe through the lens of stare decisis and abide by earlier rulings, or decide to examine problems in the case. The fragile foundation of legalized abortion created in Roe in 1973 has never settled completely into the law or culture, which is why speculating about how judges see the 50-year-old precedent occupies so much conversation during Supreme Court vacancies.

For the majority of my lifetime, confirming judicial nominees was not so contentious. In fact, Justice Ginsburg, nominated by President Bill Clinton, was confirmed in August 1993 by a 96-3 vote.

What do those three justices have in common? They made no secret of their views on abortion before their nominations and confirmations.

Justice Ginsburg established the Women’s Rights Project of the American Civil Liberties Union in 1971 and also served on its board of directors and as general counsel. The organization boasts that it was “the first national organization to argue for abortion rights before the Supreme Court . . .” There’s no question where the organization today stands on abortion.

Any questions about Ginsburg’s stance on abortion were settled during her hearing. “It is essential to woman’s equality with man that she be the decisionmaker, that her choice be controlling . . .  If you impose restraints that impede her choice, you are disadvantaging her because of her sex,” Ginsburg said.

While clarifying a talk she gave that year, Ginsburg explained: “Abortion prohibition by the state, however, controls women and denies them full autonomy and full equality with men. That was the idea I tried to express in the lecture to which you referred.”

Any “criticizing” came down to how Ginsburg would have preferred Roe v. Wade be about equal protection rather than privacy. She “first thought long and hard” about abortion, she explained, during her involvement with Struck v. Secretary of Defense.

A Planned Parenthood press release praising Sotomayor’s nomination mentions the Puerto Rican Legal Defense and Education Fund. From 1980 to 1992, Sotomayor was a “top policy maker” on its board when the fund filed briefs in at least six court cases strongly supporting abortion. With the 1980 Akron v. Ohio case, the fund wrote that it “opposes any efforts to overturn or in any way restrict the rights recognized in Roe v. Wade.” Then, a 2009 U.S. News & World Report post proclaimed “Source: Amicus Brief Proves Sotomayor is Pro-Choice,” with regards to a brief for 1989’s Webster v. Reproductive Health Services.

During Justice Kagan’s 2010 confirmation, Americans United for Life provided extensive information on her views. Throughout her legal career, Kagan was associated with various leaders and organizations in support of Roe v. Wade.

In a 1995 law review article from the University of Chicago, Kagan wrote that “a [Supreme Court] nominee . . . usually can comment on judicial methodology, on prior caselaw, on hypothetical cases, on general issues like affirmative action or abortion.” William Saunders, then with Americans United for Life, explained how “Kagan’s financial contributions, work history and writings offer clear insights into her views on whether unfettered abortion rights are constitutionally required.”

Then there’s Kagan and the “Partial-Birth Abortion” memo, a leaked 1997 letter on legislation banning the procedure. The ban was passed by Congress and sent to President Clinton, who vetoed it in 1996. It ultimately did not become law until 2003, under President George W. Bush. At the time of the memo, Kagan worked for the Clinton administration. Although she urged President Clinton to pass a form of the partial-birth abortion ban, it was one which contained “health” exceptions; the bill sent to Clinton, now law, contains only a life exception.

As Slate explains, “The basic story is pretty clear: Kagan, with ACOG’s [American College of Obstetricians and Gynecologists] consent, edited the statement. . .” The edit, in Kagan’s handwriting, read, “An intact D&X [dilation of the uterus and extraction of the fetus], however, may be the best or most appropriate procedure in a particular circumstance to save the life or preserve the health of a woman, and only the doctor, in consultation with the patient, based upon the woman’s particular circumstances, can make this decision.”

Even those who are pro-choice can recognize the weak, unfair, and even unclear reporting on the standard originalist judges are held to, particularly Amy Coney Barrett. Fortunately, the Republican-controlled Senate has the votes to confirm Barrett to the Supreme Court, where she belongs.

Kristan Hawkins is president of Students for Life of America, with more than 1,225 chapters on college and high school  campuses in all 50 states. Follow her @KristanHawkins or subscribe to her podcast, Explicitly Pro-Life.